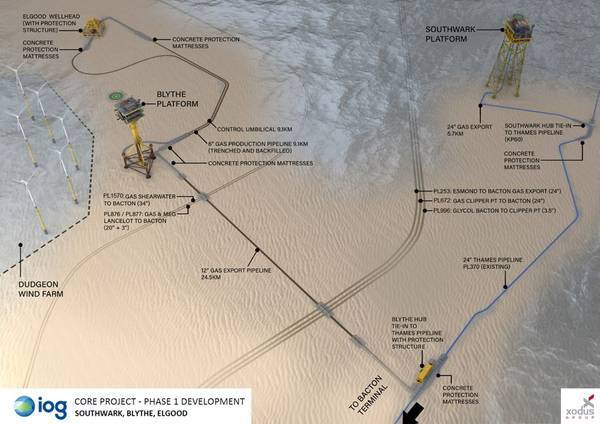 Subsea umbilical and cable company JDR has won a contract with Subsea 7 to supply a 9.3km production and control umbilical, topside equipment and subsea terminations for the offshore Elgood field in the UK Continental Shelf.

Elgood, operated by Independent Oil and Gas, is part of the oil company’s Core Project Phase 1 development, designed to develop Southwark, Blythe, and Elgood fields in the Southern North Sea.

JDR said Tuesday it would deliver the Elgood umbilical in Q2 2021. The umbilical will connect the Elgood subsea well to the Blythe platform, helping to optimize both production and control.

The Core Project Phase 1 is located in water depths between 20 meters and 30 meters and is 50% owned and operated by IOG, with the remainder owned by CalEnergy Resources Limited.

JDR will manufacture the umbilical, topside terminations, and additional subsea equipment at its Hartlepool facility, with the hydraulic hoses and LV cables being manufactured in JDR’s Littleport facility. JDR did not provide details on the value of the contract.

IOG’s field development project was approved in May 2020, and a few days later, IOG awarded Subsea 7 a contract for the provision of Subsea, Umbilicals, Risers, and Flowlines (SURF) for it.

The JDR umbilical deal comes a little over a month after IOG ordered two offshore platforms for its Core Project Phase 1 development. The two normally unmanned platforms will be built by the Dutch contractor HSM Offshore BV.

Phase 1 will develop the three already mentioned fields with a total of five production wells with gas transported onshore to Bacton via the 24-inch Thames Pipeline.