U.S. Gulf of Mexico oil companies shut around 82 percent of oil production on Monday and evacuated personnel bracing for the impact of two tropical storms Marco and Laura.

From operator reports, the U.S. Bureau of Safety and Environmental Enforcement said Monday that approximately 82.4 percent of oil production and 56.92 percent of the natural gas production in the Gulf of Mexico had been shut-in.

Based on data from offshore operator reports submitted as of 11:30 CDT Monday, personnel has been evacuated from a total of 281 production platforms, 43.7 percent of the 643 manned platforms in the Gulf of Mexico.

Also, workers have been evacuated from six non-dynamically positioned drilling rigs, of the 10 rigs currently operating in the Gulf.

Further, a total of 11 dynamically positioned rigs – of the 16 operating in the Gulf – have moved off location out of the storms’ projected paths as a precaution.

Oil company BP said Monday it was closely monitoring the storms to ensure the safety of its personnel and operations in the deepwater Gulf of Mexico. 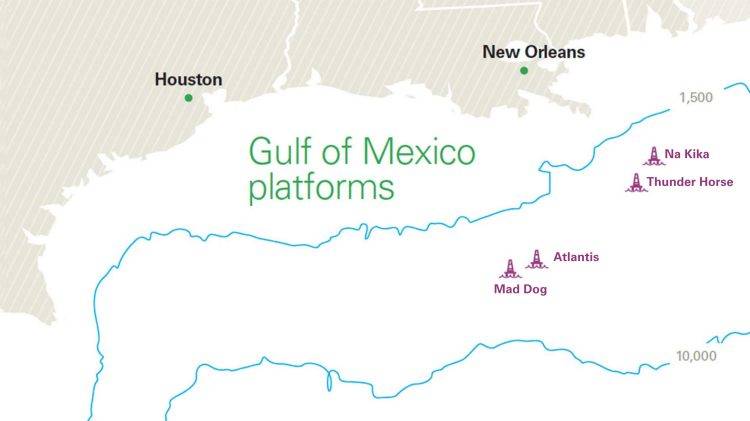 BP’s platforms in the deepwater Gulf of Mexico – Credit: BP

“With forecasts indicating the storms will move across the Northern Gulf of Mexico in the next several days, BP has evacuated all personnel from its platforms and assets and shut-in production. The four Mobile Offshore Drilling Units contracted to BP have also secured their wells and safely evaded the storms. In addition, BP evacuated our Houma Operations Learning Center in Louisiana. Safety is our top priority and we will continue to monitor weather conditions closely to determine next steps,” BP said.

Shell said Monday it had shut in production at all but one of its nine operated assets in the Gulf of Mexico and had completed the evacuation of all non-essential personnel.

“We continue to carefully monitor Laura’s potential impacts to our ninth production asset, Perdido, to determine if a safe shut-in of the facility will be necessary. All well operations have now been safely secured,” Shell said.