E&P companies planning drilling campaigns in British waters next year could face a surprisingly small selection of semisubs to choose from due to ever-shrinking ready supply in the segment.

Too many rigs and not enough work has been the norm in the British semisub segment since the 2014 oil price crash, which has meant utilization and dayrates have been lagging for several years now.

Due to continued oversupply and plentiful availability, E&P companies have been able to drill in the summer months when offshore conditions are favorable, avoiding winter months where there is a higher chance of downtime and added costs due to inclement weather.

This has resulted in the UK semisub market becoming highly seasonal, with higher utilization from around March/April and then dropping again from around September/October. The typical dayrate benchmark for semisubs in this segment is currently around the $140,000 to $160,000 range – only just covering operating costs and unsustainable for the drillers who own and manage them.

However, the tide is beginning to turn within this segment, and operators looking for a floating MODU next year may be in for a bit of a surprise. The global Coronavirus pandemic and oil price shock have added additional problems to the already distraught market and therefore drillers with rigs in the region – some of which are going through Chapter 11 proceedings –  have been making drastic decisions, which will have a lasting effect on the availability of such units in the future.

The first of these decisions is the permanent removal of rigs from the active fleet, through sales for recycling or conversion.

As can be seen from Figure 1, according to data from Bassoe Analytics since 2018 there has been six units removed from the UK and Norwegian competitive semisub fleet, and scrapping of more units is expected to be announced imminently.

Drillers have been weighing up the costs associated with maintaining, reactivating, and/or operating an asset and if this outweighs the cash flow potential, it will likely be under consideration for sale. Therefore, the total number of rigs in the UK fleet has diminished to just 11, of which three are idle but not available for near-term work.

Which brings us to the next decision rig owners have been making, and that is to cold stack (or one of the various other terms such as smart stack, istack, tepid stack) rigs rather than keeping them warm or hot-stacked. Storing a unit in the latter status costs more, however, it means rigs can return to work more quickly and without such an expensive shipyard reactivation program. But with so few drilling prospects for the remainder of 2020, companies such as Diamond and Transocean have opted to cold stack instead.

Due to the high costs associated with reactivating a cold-stacked semisub, these drillers would only consider putting their units back to work for a long-term campaign, usually with a minimum of around one year of work.

As can be seen from Figure 2, there are three units in-country that are now classed as cold stacked and are not readily available.

Available supply in the UK market next year totals just five units, but one of these has only very limited availability, which may be a problem considering that between Q1 and Q3 next year there is expected to be between 10 and 12 new campaigns off UK and Norway, with several already out as tenders and more expected to come soon. These campaigns vary from one or two-well campaigns to up to around 200 days, but few would be considered long enough in duration to justify a rig reactivation.

As has been witnessed in past years, however, there are some rigs that can move between the UK and Norwegian sectors but availability in that market is not particularly vast either. As can be seen from the rigs highlighted in bold in Figure 3, there are six units in Norway, which have free and clear availability between Q4 2020 and Q3 2021, but two of these will not be free until late Q2 or early Q3. There is potential to see a few of these Norwegian units move to the UK for work, but most are unlikely to do so and availability would still be limited even if they do.

Of the 19 units shown in Figure 3, eight are cold stacked with two of these, Deepsea Bergen and Transocean Arctic, now confirmed to be headed for the scrap heap. In addition, it’s also rumored that most, if not all of the rest of the cold stacked units will also head for permanent retirement shortly.

This is a stark reminder that in today’s market, once a rig moves to cold stack it’s almost guaranteed that it won’t return to work. Unless operators are willing to make it worth their while, rig contractors will not be able to reactivate rigs. In the current environment where everyone is trying to save money, it is unlikely that dayrates will skyrocket enough to be able to cover the cost of a reactivation, which is usually at least tens of millions of dollars.

As discussed in the most recent Bassoe Analytics article, most drilling contractors are now considering scrapping excess tonnage from their fleets, with units as young as eight and nine years old now confirmed for retirement. 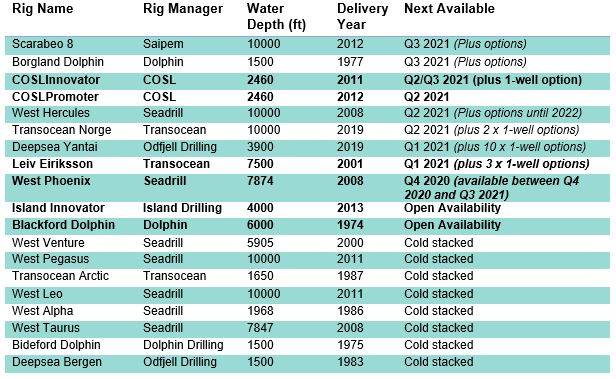 Figure 3: Norwegian semisub availability Q4 2020 – Q3 2021. Bold indicates units with free and clear availability in this period (Bassoe Analytics)
So, what does this mean for the UK semisub market going forward? Depending if all planned 2021 rig requirements come to fruition, it could mean operators will have to rethink the timing of their planned campaigns. It may mean considering drilling during the harsher months of the year to secure a slot. Rig-share campaigns could be a potential solution by tying together a few of the short-term campaigns and utilizing one rig, however, these sorts of programs have been relatively uncommon in the past due to the complexity in organizing such a deal.

An important point to note is that this considerable change is not one that can be counteracted easily. There is not a stack of North Sea-capable newbuilds sitting dormant in shipyards awaiting delivery. This will be a permanent or at least a long-term shift in the segment which could be further exacerbated, with more units cold stacked or scrapped, if operators do not find a way to proceed with plans in the coming year.

Republished with permission. The article above was originally published on Bassoe Offshore’s website.