Ocean Kinetics has completed the lifting of the pontoons of the Buchan Alpha platform as part of the decommissioning program of the platform that ceased production in 2017.

After some 36 years in production in the North Sea, and almost 150mm barrels of oil, production stopped in May 2017, and Veolia received the contract from Repsol Sinopec to decommission the 12,000-tonne semi-submersible moored floating production platform (originally a drilling rig).

Veolia then awarded Ocean Kinetics the contract for the safe removal and recycling of the Buchan Alpha production rig in Shetland.

Ocean Kinetics has said it has taken some 3,500 tonnes of material ashore, in a task that took almost 15,000 man-hours.

The final pontoon was lifted at the Greenhead Base Decommissioning facility in Lerwick on Wednesday, August 26.

The pontoons are now on decommissioning pads at the Greenhead Base in Lerwick and will be dismantled and sent away for recycling over the coming months by sub-contractor, John Lawrie.

Managing director of Ocean Kinetics, John Henderson, said the project was much more than just mobilizing the heavy lifting barge.

“We spent several weeks on preparatory work, from initial surveying, then the planning and modeling of the lifting steps. We then moved to the preparation of the rig for demolition while still maintaining the structural integrity. We cut away excess steel, carried out underwater repairs to the pontoons, and attached 24 lifting points each rated to 300 tonnes SWL, to allow the safe removal and placement of all pieces onshore.”

Ocean Kinetics used the multicat vessel Whalsa Lass was used as the main vessel along with various barges and pontoons.

“Utilising the heavy 800-tonne sheerleg crane Hebo Lift 9, we completed all the heavy lifts, both at the salvage site and at the Greenhead Base in Lerwick Harbour. Most of the lifts were between 200 and 600 tonnes with the heaviest lift being 765 tonnes.

Back in 2017, Veolia said it planned to achieve 98% recycling rate for the Buchan Alpha. 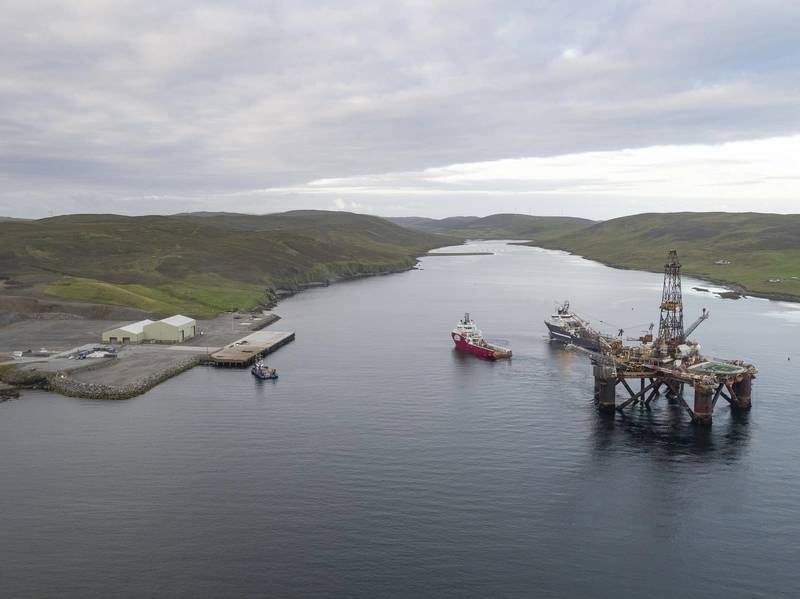