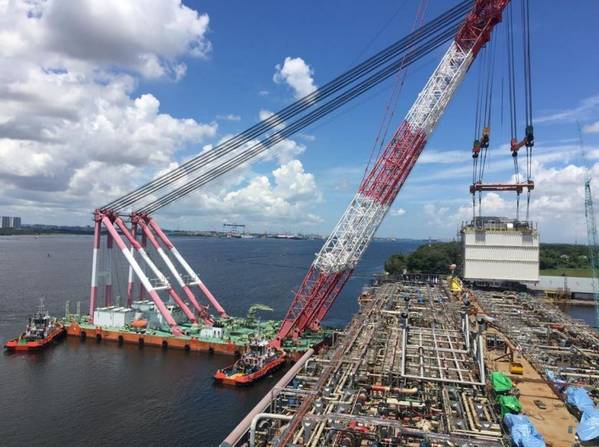 First topside module was lifted and installed earlier this week on the Energean Power FPSO at Sembcorp Marine’s Admiralty Yard in Singapore.

Oil and gas company Energean said that the electrical house (E-house), which contains all the FPSO control equipment and electrical switchgear, was lifted onto the Energean Power hull on the 24th August.

The E-house, weighing in at 850 tonnes, was lifted using the L-801 Barge pontoon crane, with lift preparation starting early morning and successful touchdown on the hull in the early afternoon on Monday.

Sembcorp Marine has been subcontracted by the main EPC contractor TechnipFMC, while lifting operation was executed by Jurong Marine Services PTE.

Once completed, the “Energean Power” FPSO will be used to develop Energean’s gas field in the Mediterranean Sea, offshore Israel.

It will be installed 90 km offshore and be the first FPSO ever to operate in the Eastern Mediterranean.  The FPSO will have a gas treatment capacity of 800 MMscf/day and liquids storage capacity of 800,000 bbls.

“Installation of the Energean Power FPSO mooring lines is now in progress and the project remains on track to deliver first gas in 2H 2021,” Energean said.

The London-listed company said earlier this week that that suction anchors, designed to keep the Energean Power FPSO in place at the Karish field off Israel, had been installed.