Shares of Offshore Heavy Transport, a maritime heavy lift and transportation company with growing involvement in the offshore wind space, will start trading at Norway’s Merkur Market on Monday, September 28.

The shares have been approved for admission to trading on the Merkur Market under the ticker code “OHT-ME.”

Describing the reasons for the admission, OHT, which has two registered shareholders, has said that it has experienced an increasing interest from the investor community “for sustainable business models and sees the listing as an excellent opportunity for meeting this demand.”

In its Merkur Market admission document, OHT explained that due to it operating in an industry that is “asset-heavy”, there is a significant capital need that relates to the investment in offshore wind installation vessels and HTVs.

“To fund these investments, significant capital is needed. Access to the public capital market, both with respect to equity and debt financing, will be important to the company and enable it to execute the business strategy,” OHT said.

OHT believes its Merkur Market listing will enhance its profile with investors, business partners, suppliers and customers; allow for a trading platform and liquid market for the shares; facilitate for a more diversified shareholder base and enable additional investors to take part in the
group’s future growth and value creation; and further improve the ability of the Group to attract and retain key management and employees.

The company intends to apply for a listing of the shares on the Oslo Børs within 6 months from the admission on the Merkur market.

OHT said that no equity capital or proceeds would be raised by the company upon the admission, adding that it has completed a private placement immediately prior to the admission. Following registration of the Private Placement, the company will have 119 registered Shareholders.

Delivery of the new shares in the Private Placement will be made as soon as the share capital increase is registered in the Norwegian Register of Business Enterprises and will occur before the trading of the shares on Merkur Market. 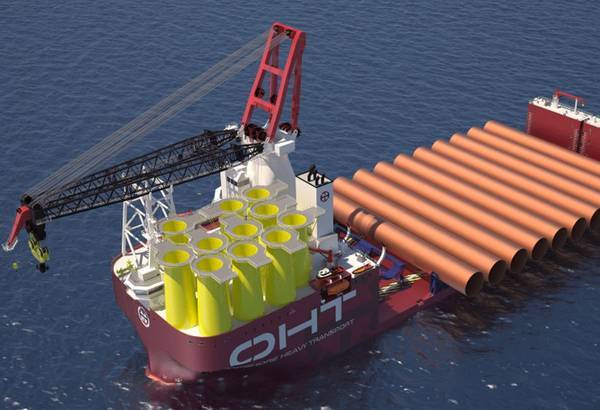 OHT said it planned to use the proceeds from the Private Placement mainly for the construction of the first Gusto NG-14000XLG wind turbine installation vessel at China Merchants’ shipyard in Haimen, China.

The company has over the years mostly transported jack-up rigs, semi-submersible rigs, and dredgers, but has been increasingly getting involved in the renewables sector, mainly transporting components for offshore wind turbines.

Apart from solely transporting the goods, the company, as previously mentioned, is now working to bolster its fleet to make it capable of installing both wind turbine foundations and offshore wind turbines.

It has already signed contracts to install wind turbine foundations on the world’s largest offshore wind development project – the Dogger Bank in the UK.

According to OHT, the company’s strategic focus is to transition from oil & gas to renewables by focusing its transportation fleet on renewable projects and by becoming a leader in offshore wind foundation and turbine installation through its newbuildings.

The group plans to exit oil & gas markets entirely within 2026, with the exception of sustainable oil & gas decommissioning projects.