August 24–28 is “Hang Dry For Climate Change Week.” Join the nonprofits Solar Oregon, African American Alliance for Homeownership, and Electrify Now and post a picture of your clothes with the hashtag #hangdry.

Hang drying clothes is a simple practice that holds nothing short of immense power and pollution-saving potential. This most humdrumiest of daily chores, in which we simply hang damp clothes over a line or rack and wait for the sun or air to dry them, has the potential to match the herculean efforts of the entire power sector — from its bulldozers, dump trucks, and train cars to its conveyor belts, thousand-degree boilers, massive cooling towers, and overhead power lines. 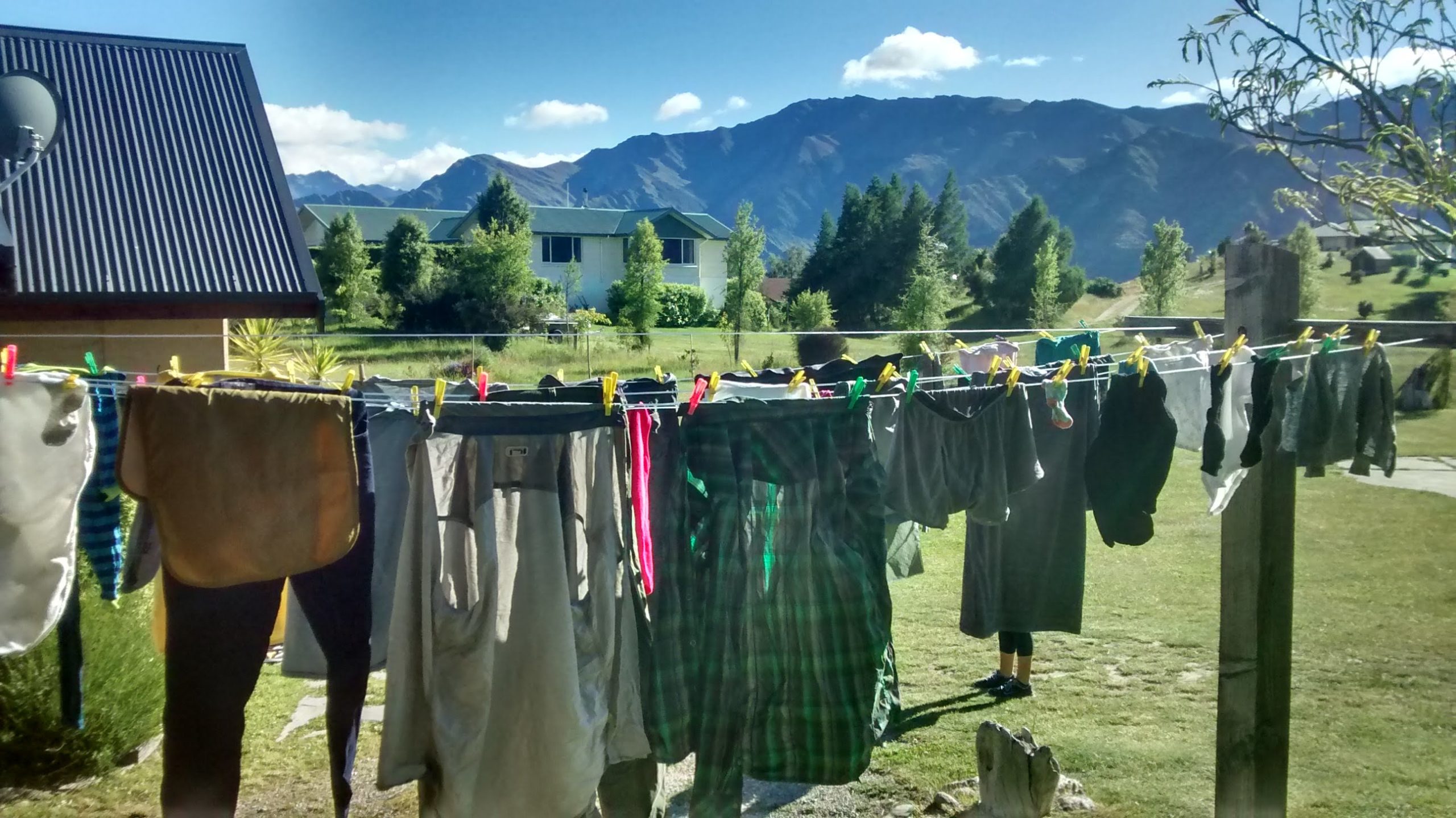 Yes, line drying is one ace in the hole for a species that needs every single effort to get itself out of a warming-world, 11th hour predicament. It’s a proverbial slingshot stone as we nervously stare down Carbon Goliath. Hanging laundry ranks at the top of the list of life choices we small folk can make for its ease and extraordinary, pollution-eliminating effects.

Almost the entire world, even industrialized countries that can afford clothes dryers and the energy to power them, seems to recognize this. In country after country, warm climate alongside cold, citizens hang their clothes out to dry. In Siberia, people freeze their clothes dry and the ice sublimates (changes directly from solid to gas).

In China, despite rapid industrialization, it’s hard to find dryers sold in stores. Brazil doesn’t even keep national statistics on dryer usage because so few people have them. In Japan, where the average home is 60 percent smaller than that of Americans, the Japanese choose line over dryer drum even when they happen to have one in their home. In the vast majority of the world, hang drying is the norm and dryers are the exception, and for good reason. The simple task saves an obscene amount of energy and a decent amount of money with little effort. And most significantly, its large-scale effects are enormous when it comes to helping the climate.

My first real exposure to solar-powered laundry drying started when I boarded an airplane and flew across the ocean to spend a year as an exchange student in Italy, at age 18. Italians are famous for line drying clothes, and images of dark-haired Neapolitans hanging sheets on lines between buildings are present in many of our collective imaginations for good reason. That year I learned that line drying goes way beyond the sentimental. It is an ingrained cultural habit in which only 3% of households have a dryer in a country of 60 million, with the eighth largest economy in the world. Virtually all Italians — regardless of any age, income, climate, or season — air dry their clothes and linens.

Coming from the US, this was a fascinating cultural phenomenon. In Italy, I noticed drying racks and outdoor lines of every shape and size imaginable in houses and apartments much smaller than Americans’. In winter, I saw clothes drying near radiators, and in summer, they hung off balconies. I learned how cross breezes blowing through an apartment can dry clothes in an hour. In a car-free city, pedestrians & bicycles only, in Italy. Photo by Cynthia Shahan, CleanTechnica.

And I took in the fact that this practice, so different than what I was used to, was unremarkable to Italians, a daily chore done without appreciation for the energy or money saved or the pollution avoided or the power plants not built.

The World vs North America

Italy isn’t unusual in its avoidance of this appliance so near and dear to the hearts of my fellow North Americans. Besides Canada, none of the world’s top 10 economies use the clothes dryer anywhere near as much as we do. The richest and most productive nations on earth have managed to thrive in absence of an appliance that many North Americans consider to be indispensable.

And these are estimates of just the top 10 economies in the world. The rest of the world hang dries its clothes even more. Why are North Americans so out of sync?

This phenomenon demonstrates the awesome, and often unrecognized, power of culture. Many nations have more reasons than North Americans to use a dryer (smaller houses or colder climates), and yet they don’t.

And while environmentalism might be a factor in some people’s decisions to line dry, the practice is way too widespread to consider it tree hugging. It is simply the most common way for most communities to dry their clothes, and when you see your neighbors hang drying, you tend to do so too. It’s woven into culture, an invisible hand that profoundly affects all of our daily habits.

In the US, I don’t know one other person who air dries his/her clothes. In Europe, I don’t know anyone who uses, or even has a dryer.

In China, where seemingly every other technological devices are adopted en masse by a rapidly industrializing culture, “the only people who buy dryers are foreigners,” and some factories “stopped producing dryers since last year because they don’t sell.” The reason for this, amongst other factors, is Chinese culture, with “years of tradition and an unshakable belief in nature’s superiority.” Sunlight “leaves clothes cleaner and healthier to wear, and is better for the fabric, than a machine.” You hear these reasons espoused in other countries as well. The original form of human use of solar energy. Image by Joseph Wachunas.

It’s likely that the vast majority of the world hang dries laundry because people have no other choice. Dryers, and the excessive amounts of electricity they require, are an extreme luxury. When I traveled in Ghana, I saw people both hand wash clothes and hang them to dry. I bet that a good percentage of the world’s population doesn’t even know the dryer exists. And, of course, much of the world recognizes that the dryer has enormous impacts on energy usage and air pollution. When different factors and competing studies are taken into account, a reasonable estimate is that in American homes, dryers account for around 7–8% of residential electricity usage.

So, what does that 7–8% of residential electricity usage look like in numbers we can understand?

(See all my estimates and stats in more detail here.)

The world also hang dries to save money. Most countries pay significantly more for electricity than Americans and Canadians do, and so have added incentive to hang dry. In North America, electricity is underpriced and doesn’t take into account the costs of pollution. (See: tragedy of the commons.)

I estimate that in hang drying clothes in my family we save $341 per year while the average American family would save $200. While these totals alone aren’t that significant, they add up over time. In other countries, cost savings play a bigger role. In Italy, for example, I would be saving about $700 a year, while in Germany more like $1000.

In the US, money becomes a much larger consideration for the 20% of people using laundromats. With an average cost of $2.00 per load to dry clothes in a laundromat, if you’re washing clothes near the North American average of 289 times per year, you can save nearly $600 by line drying. Line drying can thus offer a huge financial savings to those middle to lower income Americans who are using laundromats.

Those of us who hang dry clothes outside know that they smell incredible when brought indoors. Lie on sheets that have dried in the sun and it’s as if you’re lying on a bed of flowers. Scientists in Copenhagen recently published an article explaining why this happens. They did a study and found that only clothes that are dried and oxidized in the sun produced compounds like “methacrolein, which has a typical floral scent, pentanal whose smell is fruity, 2-hexenal which smells like almonds, nonanal and decanal which both produce fresh, citrusy aromas.” Thus, hanging your clothes outside literally brings the fresh scent of flowers, almonds, and citrus into your home, all provided free of charge by the rays of the sun. These clothes are going to smell amazing, Image Joseph Wachunas

The primary reason people use a clothes dryer is that it saves time. But with the vast majority of the world’s population, including most of the world’s leading economies, air drying clothes, hanging laundry can’t be that much of a daily encumbrance or drag on productivity. It’s all about making it part of your routine. Get the right drying rack or clothes line set up in your home and hang drying becomes second nature. On average, I’ve found that each load of line-dried laundry takes approximately 8 minutes of extra work. 8 minutes to reduce my home’s energy use by a lot, and keep thousands of pounds of coal in the ground, seems like an incredible bang for my buck when I’m looking for small ways to make the world better for my daughters.

Nearly every day I wake up and start at least one load of laundry. Later, while I’m hang drying clothes, sheets, towels, and cloth diapers, I feel an immense amount of meaning and purpose in my routine. I find so much satisfaction in saving enormous amounts of energy, money, and pollution and knowing I’m doing something unabashedly good. Hang drying clothes gives us small folks access to the most easily accessible and low-cost form of solar energy.

How inspiring that one answer to the intractable and enormous climate crisis of our time can be found in something as small and simple as air drying clothing. How great to think that we can scrub our skies, clean our water, reforest our earth, and create a better future for our children all with a little string and some clothes pins. Last year, hundreds of people joined the first Hang Dry for Climate Change Week and took pictures of their clothes hang drying. Join several nonprofits and post a picture of your clothes to social media with the hashtag #hangdry.