Australian oil and gas company Pilot Energy, with a stake in an offshore oil and gas block in the Northern Perth Basin, is now pursuing the development of an offshore wind farm in that same block.

Pilot Energy said Friday it was starting a detailed feasibility study to pursue the development of an offshore wind, onshore wind and solar power project to be located along the offshore/onshore coast of the Mid West Region of Western Australia.

The company is the majority owner (60%) and operator of WA-481-P offshore block, covering over 8600 km2 along approximately, 250 km of the offshore Western Australian coast.

“The offshore wind resource within the area covered by WA-481-P has been measured to have an annual mean wind speed greater than 9 m/s at a hub height 100 meters. The eastern boundary of WA-481-P is approximately 10 km offshore in relatively shallow water depths ranging between 20 to 40-meter water depth along the entire eastern portion of the permit from 10 km to 30 km offshore. Out of the 8600 km2 area of the permit over 7600 km2 (88%) of the permit area is in water depths of 60 meters or less,” the company said.

Pilot’s Chairman, Brad Lingo, said the project was was “a perfect opportunity to develop a major renewable energy transition project in the Mid West Coast Region of Western Australia.”

Lingo said: “This is exactly the type of development that demonstrates the ability to substantially redefine how the Australian offshore oil and gas industry can, in parallel with existing operations, participate in a low carbon future through offshore renewable energy projects delivering substantial low-cost energy to Western Australia.”

“The substantial nature of the offshore opportunity in Western Australian also presents the option to supply renewable hydrogen for domestic residential and industrial consumption as well as the potential to supply international markets.”

The concept for the Project is to develop “a major” offshore wind farm located in the area of Offshore Exploration Permit WA-481-P and to combine this development with an onshore solar farm to deliver a combined wind and solar project “capable of delivering a large scale source of low-cost green energy on a sustainable basis.”

For the purposes of undertaking the feasibility studies, Pilot Energy has developed a conceptual development layout for a 4-stage development for up to 1.1 GW of offshore wind power generation.

“This is comprised of up to seventy-eight (78) 14MW wind turbines… Under this development concept, the offshore wind turbines can be located at least 14 km offshore and in water depths of between 20-40 meters and located in the area covered by the Offshore Exploration Permit WA-481-P.”

According to Pilot Energy, the development of the Mid West Wind and Solar Project and the location of the offshore wind farm facilities is intended to be developed in such a way to assess the feasibility of accessing and utilizing existing offshore and onshore gas infrastructure in the overall development with a view of delivering “a significant multi-tasking of the existing facilities.” 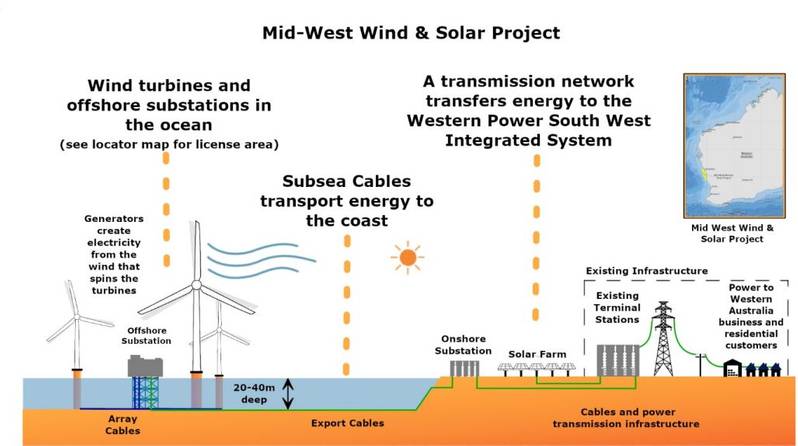