Luiperd well was drilled to a total depth of about 3,400 meters and encountered 73 meters of net gas condensate pay in well-developed good quality Lower Cretaceous reservoirs.

Total at the time said the well would be tested to assess the dynamic reservoir characteristics and deliverability. At the same time, Africa Energy, a partner in the project, said the success at Luiperd led to a decision by the JV to proceed with development studies and engage with authorities on the commercialization of gas instead of drilling another exploration well.

In a statement earlier this week, Africa Energy said that the results of the drill stem test, which began after the discovery mid-October, came up positive, showing “show high condensate yield and excellent reservoir connectivity.”

The Luiperd-1X  well was opened to flow on November 1, 2020. After several tests at different choke settings, the well reached a maximum constrained flowrate through a 58/64” choke of 33 million cubic feet per day of natural gas (“MMcfpd”) and 4,320 barrels of condensate per day (“bcpd”), an aggregate of approximately 9,820 barrels of oil equivalent per day (“boepd”). The choke configuration could not be increased due to surface equipment limitations, Africa Energy said.

Jan Maier, Africa Energy’s VP Exploration, commented, “The Luiperd discovery proves that the Outeniqua Basin offshore South Africa is a world-class hydrocarbon province that remains highly under-explored. [… ] We are very pleased with the positive test results that show high condensate yield and excellent reservoir connectivity. These results confirm the joint venture’s decision to proceed with development studies and to engage authorities about commercialization.” 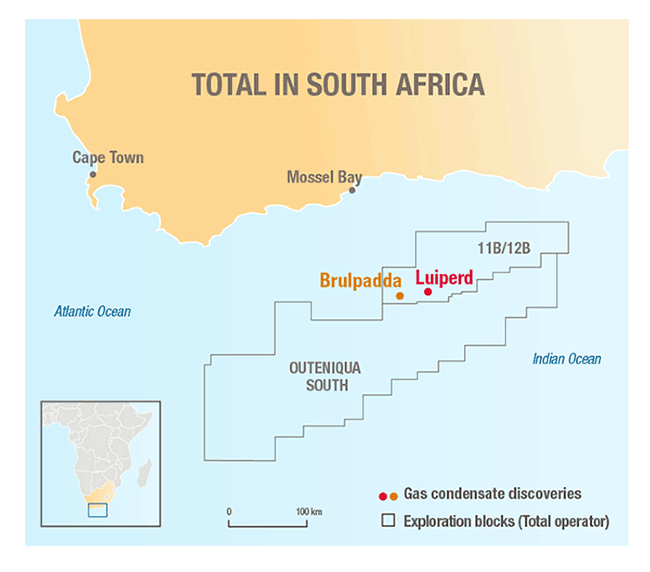 Total’s partner said that the absolute open flow (“AOF”) potential of the well is expected to be significantly higher than the restricted test rates.

The 19,000 square kilometers Block 11B/12B is located in the Outeniqua Basin 175 kilometers off the southern coast of South Africa.

It is in this block that Total last year made the play-opening Brulpadda discovery. Both Brulpadda and Luiperd are located in the Paddavissie Fairway in the southwest corner of the block.

In an article last week, IHS Markit said it expected reserves at Luiperd to be in excess of the 1 billion barrels of oil equivalent (Bboe).

“Luiperd is believed to dwarf the nearby recently discovered Brulpadda field, with potentially twice the gas reserves, but the liquids gas mix is thought to be similar,” IHS Markit said.

The original five submarine fan prospects in the Paddavissie Fairway all have direct hydrocarbon indicators recorded on both 2D and 3D seismic data and intersected in the wells, significantly de-risking future exploration, Africa Energy said earlier this week.

Total is the operator of the offshore block with a 45% working interest, alongside Qatar Petroleum (25%), CNR International (20%), and Main Street (10%).  Africa Energy holds 49% of the shares in Main Street.

As with the Brulpadda last year, the Luiperd was drilled using Odfjell Drilling’s Deepsea Stavanger semi-submersible drilling rig. AIS data shows the rig has moved away from Block 11B/12B, but is still located in South Africa, ahead of the expected departure for Norway.

Namely, Total has, following the Luiperd discovery, informed Odfjell Drilling that there would be no further drilling scope for the rig, after the completion of the first well.

According to Odfjell Drilling, the offshore drilling rig is expected to demobilize to Norway shortly. The rig is currently located north of Robben Island in Table Bay, north of Cape Town.