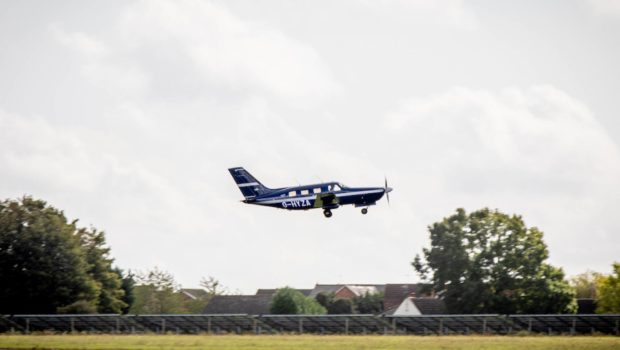 Last week, California based ZeroAvia completed the first ever test flight of a 6 passenger airplane powered solely by a hydrogen powered fuel cell. Previous test flights of the company’s fuel cell powertrain incorporated batteries because aviation people are highly risk adverse. Not only that, funding tends to dry up when airplanes fall out of the sky.

At its testing facility at Cranfield airport north of London — which just happens to be smack in the middle of the high tech area that has grown up around Formula One racing — ZeroAvia’s test bed, a 6 passenger Piper Malibu, flew for 8 minutes on fuel cell power alone. The airplane reached a height of 1,000 feet and an airspeed of 100 knots (115 mph).

After the flight, ZeroAvia founder and CEO Val Miftakhov told the press his team has talked with seven aircraft manufacturers about possible retrofit and new-build applications for the propulsion system and has signed letters of intent with 10 airlines that have expressed an interest in the program. “It’s hard to put into words what this means to our team, but also for everybody interested in zero-emission flight,” he said. “While some experimental aircraft have flown using hydrogen fuel cells as a power source, the size of this commercially available aircraft shows that paying passengers could be boarding a truly zero emission flight very soon. All of the team at ZeroAvia and at our partner companies can be proud of their work getting us to this point, and I want to also thank our investors and the UK Government for their support.”

The company plans to complete a flight of 300 nautical miles from the island of Orkney, where there is a hydrogen production plant, to the mainland before the end of this year. It says by the end of 2023, it will have secured a supplemental type certificate to retrofit an as yet unspecified 10 to 20 seat aircraft with its hydrogen propulsion system with a range of around 500 nautical miles. The Cessna Caravan, the Twin Otter, and the Dornier 228 are being considered as possible early adopters of hydrogen power, according to AIN Online.

By 2030, the company says its technology could be powering a 50 to 100 seat aircraft in commercial service and that by 2040 a hydrogen powered aircraft could be carrying 200 passengers on flights of up to 3,000 nautical miles. Miftakhov says the Dash 8 and ATR42 regional airliners have been identified as possible early contenders for conversion to hydrogen.

Under a flight test plan approved by the UK Civil Aviation Authority, ZeroAvia will modify the Piper Malibu to increase its hydrogen storage capacity. Miftakhov says there may be opportunities to use this aircraft type for some early applications prior to full certification, such as trial operations in rural areas and limited cargo services in 2021. The power rating for the Piper Malibu’s propulsion will increase from 230 kW to 260 kW, which is close to that of the aircraft’s existing piston engine. The powertrain for the larger aircraft ZeroAvia is targeting the rating will be around 600 kW.

Through the HyFlyer program sponsored by the UK government, ZeroAvia is partnering with green hydrogen producer European Marine Energy Center and fuel cell specialist Intelligent Energy. EMEC supplies the hydrogen for the test flights and has developed a mobile refueling platform together with ZeroAvia at Cranfield to demonstrate its concept for the production, storage, and distribution of hydrogen fuel for airports.

ZeroAvia is not the only company working on hydrogen powered zero emissions aircraft. On September 21, Airbus unveiled three concepts for hydrogen powered airliners and announced plans to have one ready to start commercial service in 2025. Universal Hydrogen unveiled plans earlier this month to retrofit Dash 8 and ATR42 regional airliners with hydrogen modules. The company claims that its technology would avoid the need to have costly refueling infrastructure because the fuel modules would interface directly with the new propulsion system, albeit with the loss of around 10 passenger seats.

Carbon emissions from commercial aircraft are responsible for about 2.5% of global emissions. While the coronavirus pandemic has taken a sledgehammer to air travel, it is likely the industry will rebound in the next 12 to 18 months. Decarbonizing air travel will be a necessary part of combating the rise in average global temperatures, which makes the news from ZeroAvia that much more important.