Decommissioning the UK’s offshore oil and gas infrastructure will cost the taxpayer £24 billion, according to estimates from HMRC. So why can’t we leave man-made structures in the sea and thereby save the cost of removal and recycling? That would be a big win for the public purse.

However, to do that, we would have to test the pillars of sustainability: the economy, environment, and society.

Decommissioning an oil rig is a big job. Offshore installations consist of the equipment for oil and gas processing and drilling (the topsides), and the supporting seabed-to-surface structure. This is most often a steel frame, piled to the seabed (the jacket). The largest steel jacket in UK waters is that of the Magnus oil platform, which weighs 30,000 tonnes – around the weight of 20,000 family cars.

Removal is typically undertaken in two stages. First, the topsides equipment is cleaned and broken into sections for lifting onto crane barges or, for heavier topsides structures, a double-hulled tanker. Once the topsides has been removed, the jacket is cut, lifted onto a barge and both topsides and jacket are taken onshore for dismantling and recycling.

The oil and gas wells always need to be plugged to prevent the contents of the abandoned hydrocarbon reservoir leaking into the surrounding environment. But there is ever-growing evidence that leaving the jacket and topside structures in the sea is an environmental positive.

In the Gulf of Mexico, the US program Rigs to Reefs has turned 532 oil and gas platforms into artificial reefs. After several years in the water, each structure becomes covered by epifaunal organisms such as oysters, mussels, barnacles, tunicates, sponges, and corals. These create an increasingly complex surface that provides thousands of nooks and crannies for organisms such as crabs, worms, sea urchins, and blennies to use. These animals then provide food for larger fishes and the structure becomes a true reef ecosystem.

The Scottish Wildlife Trust is also proposing that architecture removal may not be the best environmental option. Similar to the Gulf of Mexico, structures off the coast of Scotland provide hard surfaces that are colonized by anemones, hydroids, bryozoans, sponges, mussels, barnacles, and soft and hard corals. They have also become breeding grounds and shelter for commercially important fish and they attract predatory marine mammals.

Decommissioning, on the other hand, destroys thriving marine ecosystems that have built up over decades. It also results in increased harmful air emissions, including greenhouse gas emissions, from the marine traffic required to conduct the removal works.

Decommissioning offers few social or economic benefits either. It creates few jobs, particularly for the onshore dismantling and recycling parts of the process. For example, removing the Buchan floating production facility provided just 35 jobs. And at the end of the process, nothing is left. Ultimately, decommissioning is a drain on taxpayer funds.

Despite the lack of benefits, the UK continues to remove offshore architecture at the rate of around 70,000 tonnes to 100,000 tonnes a year. The reason for this is that marine law says we have to.

The international OSPAR convention’s Decision on the Disposal of Disused Offshore Installations prohibits signatory countries (including the UK) from leaving offshore architecture in the sea, either wholly or in part. It mandates that all topsides installations are returned to shore and that subsea structures weighing less than 10,000 tonnes be completely removed. Due to the difficulty associated with removing larger structures, some can have their bases left in place.

It is also interesting to note that OSPAR is at odds with the UK’s Conservation of Offshore Marine Habitats and Species Regulations 2017. OSPAR says we should remove structures irrespective of harm to marine life, whereas the UK regulations are focused on preventing activities that could kill or injure protected marine species. 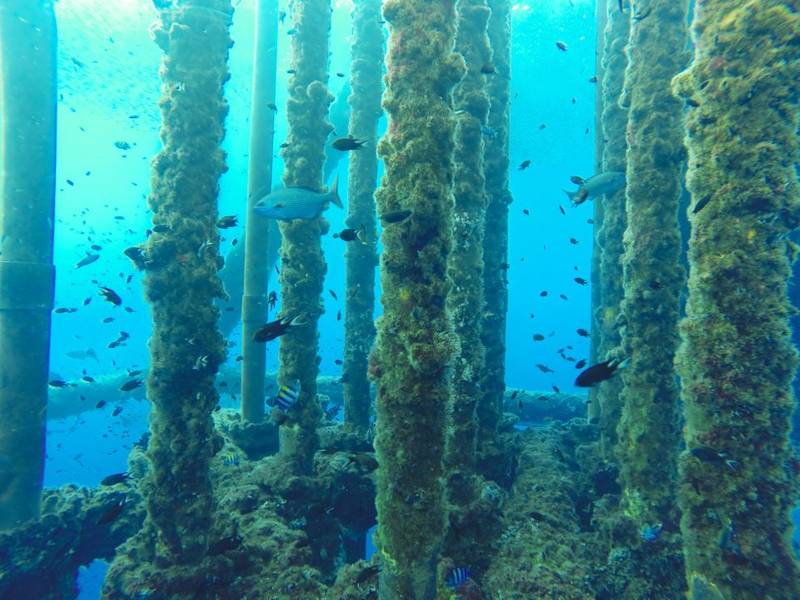 Since the public purse has so much to gain from leaving man-made structures in the sea as a benefit to marine ecosystems, the UK government should base its case for removal on economic, societal and environmental evidence. If the evidence can’t support removal – which I don’t believe it can – then the UK should challenge the fitness of current international marine legislation.

Finally, a frequent counterargument is that if we left offshore architecture in place we would end up with a public furore similar to the one that forced Shell to abandon its plans to dispose of the Brent Spar tanker loading buoy at sea in the 1990s. But if we used the savings from leaving offshore installations in place to support climate management investment, I believe environmental groups and the broader public might see things very differently.

This article is republished from The Conversation under a Creative Commons license. Read the original article.