Who Is Mr. Red Lake?

And How Did This $3 Million Market Cap Get Him?

So hot that even Mr. Red Lake himself can’t get a hotel room today.  This is a man who was part of the team that discovered 8 million high grade ounces for Goldcorp in the 1990s.  His team turned Goldcorp from a struggling low grade miner into a 5-star, high grade, world famous, billion dollar market cap.

So many people have flocked into Red Lake that there is literally no place to stay.  The one road in from Vermilion Bay is a 150 km driveway. Men are scrambling to find places to live wherever they can.

I can only remember seeing any sort of resource play buzzing with this much activity once before.

In the middle of the Bakken oil boom I flew from Vancouver to Calgary, to Regina….then drove down to tiny Estevan, pop 13,000, in southern Saskatchewan.  Estevan was the heart of the Canadian Bakken oil play.

My flight to Calgary from Vancouver was near empty, but the flight to the much smaller Regina was packed.
Regina—great city but not a tourist hotspot.

And then when you get to Estevan, whoa…….I couldn’t believe my eyes.

I’m not kidding you, there was four hotels being built.  There was a trailer camp that had to have 350 units. A buddy of mine has some real estate there that he was renting out and just laughing all the way to the bank.

All of those people were flocking to Estevan – because the region had hit the oil motherlode.  The Estevan Bakken boom was real.

Stocks of those Bakken players were hot too in those days.   Just like the town.

That is Red Lake, Ontario today.  While this camp has produced over 30 million ounces since the 1940s of some of the highest grade gold ever—it was quiet for a lot of years.  Then came some big Red Lake gold discoveries

and….Red Lake is once again BOOMING.

But this is all about real gold, not black gold.

That is good for Red Lake.

Not surprisingly, Mr. Red Lake is back on the scene and he is ready to make some noise with yet another high impact Red Lake property.

For speculative and resource investors, Red Lake is the place and the Mr. Red Lake is most definitely the man.

The exciting part is that these new big discoveries are not in the main East Red Lake camp — they’ve actually expanded the camp to the south (Great Bear) and the west (Trillium). That has opened up the potential for many more discoveries.

Mr. Red Lake is Tim Twomey who for 14 sweet years was part of the geology team with Goldcorp in Red Lake, starting in the 1990s.

Goldcorp became known as a 5-star, high grade gold producer (it was bought out by Barrick last year)—but they struggled for years with their Red Lake mine.  Then Twomey and the team discovered some much higher grade veins about 1500 feet over from where they were mining.

The rest is history.  Over the next few years, they put 8 million ounces of high-grade gold—almost two ounces per ton (50-60 g/t+) on the scorecard.

So let me be clear:

This is THE GEOLOGIST you want trying to find another multi-million gold score in Red Lake.

What Twomey was a part of at Goldcorp is an unparalleled mining success—turning Goldcorp into a multi-billion dollar market cap.

Now Twomey is back in Red Lake, and I’ve discovered the next play up there that is using his invaluable expertise.

The tiny Red Lake play I’m going to introduce you to tomorrow: 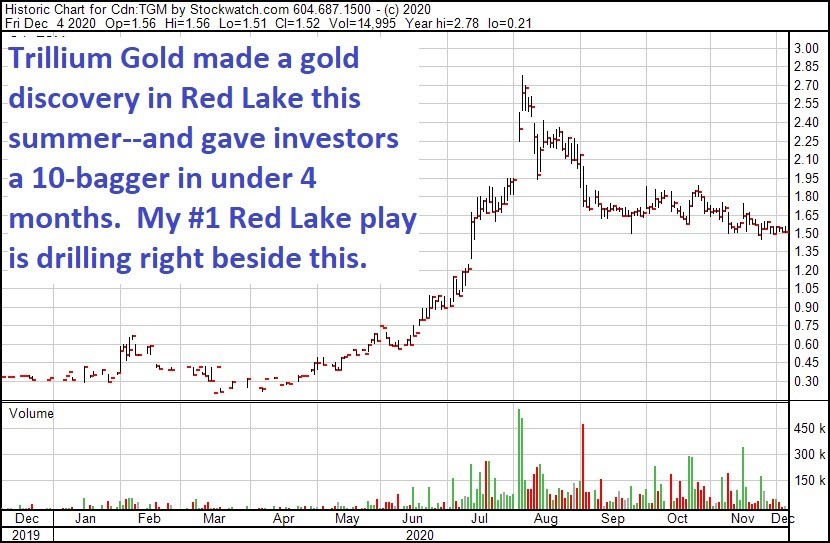 In a recent interview, Tim educated me on one very important point—everyone thinks of Red Lake as super deep and super high grade.  But the original Campbell Mine, Goldcorp’s mine, Great Bear and Trillium—all found high grade gold at surface, and then kept drilling and digging to get the super high grade underground ore.

So you can find a lot of gold for a little amount of money up there.

A Sub-$3 Million Market Cap With Twomey Directing The Drill….

Tim Twomey’s entire three decade plus career has been very exciting.  Success has followed him in a remarkable way.

After 14 years of repeated success finding Red Lake gold for Goldcorp he moved on to Premier Gold Mines in 2008. Again big success… where he and his team picked up a Northwestern Ontario Prospectors Association Discovery of the Year Award.  This was a Hard Rock project in Geraldton, Ontario—6 million ounces and another rocketing stock chart. 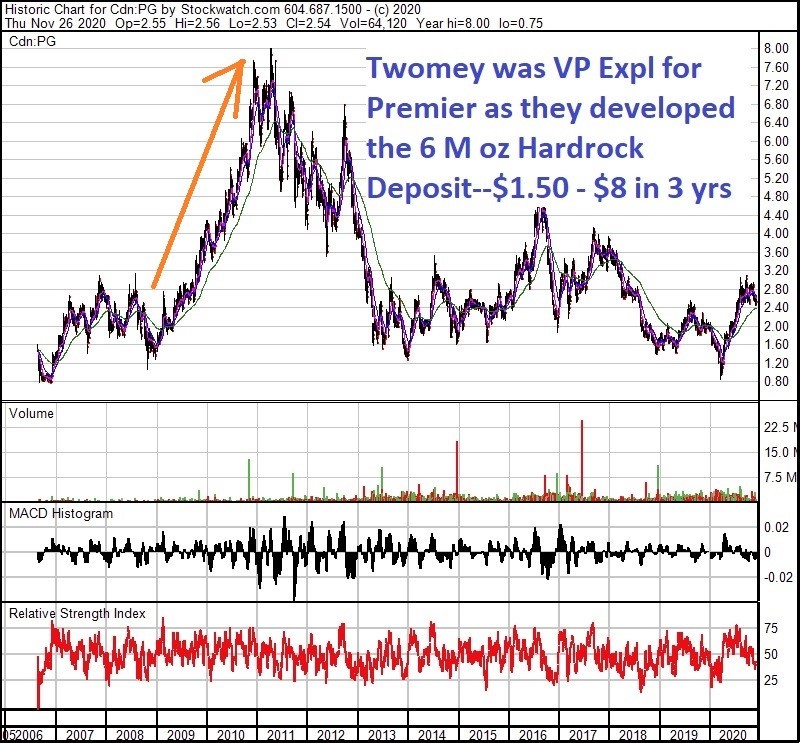 That isn’t a bad looking resume for a geologist.  14 million ounces of gold discovered.  At today’s gold price of $1,800 that is more than $25 billion worth of gold.

With those 14 million ounces already on the ledger, Twomey is a gentleman of leisure now, and can pick and choose where he works.  He doesn’t need to find the good deals…..anyone with a good deal comes to him.

That is why I’m so excited that HE IS BACK.  The only reason for him to get interested in anything is–because the opportunity is just too good to ignore.  Not only is he back, but he’s back in Red Lake where he is the man that every company would want looking for gold.

The crazy thing is that he is back with has an asset that he clearly loves.  He is pointing the drill for that company—which has a market cap of just under $3 million.

Clearly the market hasn’t picked up on this company or the fact that Twomey is involved.  Every other publicly traded Red Lake operator has already had a big run thanks to Great Bear and Trillium success —— none of those other stocks have Mr. Red Lake pointing the drill.

Folks, all exploration is high risk.  But a 15 cent stock means that downside is relatively small, but the upside—just 23 million shares out—is explosive—IF THEY HIT A GOOD HOLE.

Do Not Miss My E-Mail Tomorrow!!!

This is a sub-$3 million dollar market cap this morning.  It’s about to drill a very prospective property–in the hottest gold camp in the world; Red Lake. Tim told me that he loves the location, but what he loves even more is the fact there is no modern exploration on it—virgin ground.

This junior landed this property before this Red Lake boom.  This is exactly like buying acreage in the Bakken before they cracked the code.  Acreage values there went from $2,000 per acre to $180,000 per acre —— interest in Red Lake has done the same thing over the past 18 months.

When the market realizes about Twomey and the asset that brought him back to Red Lake…well I think this stock is going to be a lot of fun to watch before the company even does anything.

Neither the Red Lake exposure or Twomey are priced into the stock in any way.  I expect that to change, starting tomorrow!

Tomorrow I’m going to tell you everything you need to know:

2 – The low valuation this stock has to relative to every other Red Lake operator despite having Mr. Red Lake and an asset he loves
3 – The tight, tight, tight share structure that sets up an explosive situation with this tiny market cap
4 – And of course the name and ticker symbol of this stock.

I used my network of mining CEOs to find this gem. This is what I do all day long–look for stocks like this! I now own 3% of the company. And you can buy it at the same price I did.

Look for my e-mail tomorrow.