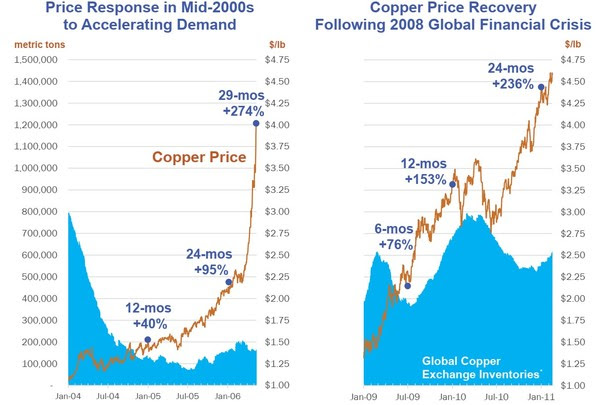 This is the very early innings the ULTIMATE SUPER CYCLE for copper.

This metal has made investors a lot of money in past cycles, but this one is very different.

The Green Revolution is taking hold, and most investors are clueless about how much copper is required.  At the same time, new spending on new copper supply is falling off a cliff.  New discoveries and existing copper grades are going down.

Looking at simply supply and demand here…the conclusion is blindingly obvious. Everyone should be bullish copper.

The market is sending a very clear signal that a paradigm shift for copper is happening.  This copper train is leaving the station and we need to get on board right now!! 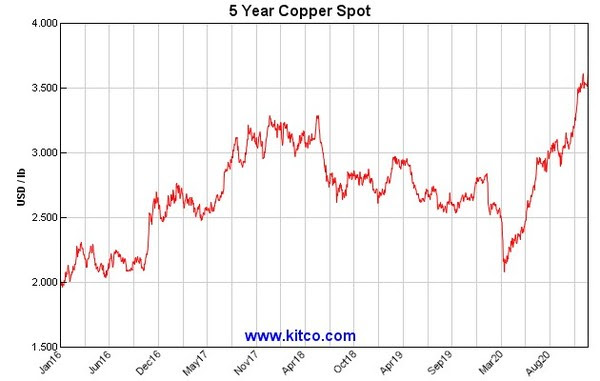 Incredibly — despite the near complete halt to economic activity from COVID– copper prices reached a seven-year high in December 2020.  The market smells what is coming in the decade ahead and is just starting to price it in.

As always the most leverage to any commodity trade is in the junior producers.  Whatever percentage copper moves higher—the junior stocks will move exponentially more.

I’ve been building and will continue to build a portfolio of junior copper players that give me huge upside exposure to copper prices.

Tomorrow I’m going to be giving you the copper junior that can offer the ULTIMATE LEVERAGE to what I believe is the ULTIMATE COPPER SUPER CYCLE.

Copper Demand Is On The Verge Of Going Ballistic

In the past month I’ve read every piece of research on copper that I could get my hands on.

US brokerage firm Goldman Sachs may have summed up the overwhelming consensus with this:

The bull market for copper is now fully underway with prices up 50% from the 2020 lows, reaching their highest level since 2017. This current price strength is not an irrational aberration, rather we view it as the first leg of a structural bull market in copper.

As I said.  A copper SUPER CYCLE is at hand —— and I believe that even analysts like Goldman are not willing to publicly go on record with how astonishingly big this trade is going to be.

Understand this please.  Copper is the very heartbeat of the green revolution.

Every type of renewable energy source requires copper because copper is by far the most efficient conduit.

Not just some renewable energy systems.  All of them — solar, hydro, thermal and wind energy—need copper.

And there is no alternative.

That means the transition to green and demand for copper are tied at the hip.

Next point to understand —— renewable energy assets require 3-15 times as much copper as conventional power generation per unit of installed capacity.

And since we know that renewables are growing at a stunning rate so too therefore will be the demand for copper.

The equation is simple:

Copper is an irreplaceable metal to meet the goals of a greener economy.  Copper is unmatched in its electrical and thermal conductivity.  For the move to green there is no alternative to copper.

The renewable movement is now moving across the planet at a breathtaking pace.  Trillions of dollars are about  to be spent on this initiative. Coming out of COVID the world’s leaders needed something that they could pour HUGE money into to stimulate economies,

That something is The Green Revolution.

The entire world is now on board with going green, even the good old USA with Biden in office and the Democrats controlling both the White House and Congress.

The Green Revolution is the one thing every EVERY GOVERNMENT on the planet agrees is worth spending on in 2021.  There is so much money that is going to be poured into renewables —— all of which require more copper.

Spend to stimulate the economy.  Spend to create jobs. Pick a country and you can bet they are spending big money on green.

I can go on and on. Even Nigeria’s COVID-19 stimulus plan includes $620 million for a program to install solar home systems for 5 million households.

When we look back 10 years from now, it will be very clear that COVID-19 was the turning point when renewables went from zero to 60 mph in the blink of an eye.

It was also the moment that copper entered its ULTIMATE SUPER CYCLE.

Nothing makes that clearer than Electric Vehicles.

Today there are 1.2 billion automobiles on the road.    Almost none of them are electric.  Governments across the world are now rolling out complete bans on the sale of combustion engine automobiles……that means that electric vehicles on the road will go from a few million to hundreds of millions and eventually to a billion.

Every one of those EVs required 4 times as much copper.

But —— that copper supply growth isn’t coming.  Certainly not without a major increase in copper prices.

That creates a very bullish DOUBLE WHAMMY, exploding demand and no supply growth ready to meet it.

On the supply side copper has three big challenges:

1 – Years of underinvestment by companies forced to live within cash flow as the access to capital dried up since the last copper peak.  The reduction in spending is in the tens and tens of billions.  In 2013 the 35 largest producers of copper had combined capital expenditures of $104 billion.  By 2016 that number had dropped to only $41 billion and has shrunk further since then. (2)

According to CRU Group (2) only six major new projects to produce copper were completed by 2020 against a global slate of 80 planned developments.  A lack of money has resulted in all kinds of projects pushed to the back-burner.

2 – Virtually zero no discoveries for a decade —— check out the chart below.  The last decade has had 2!!!  That means that the long term copper cupboard is empty. 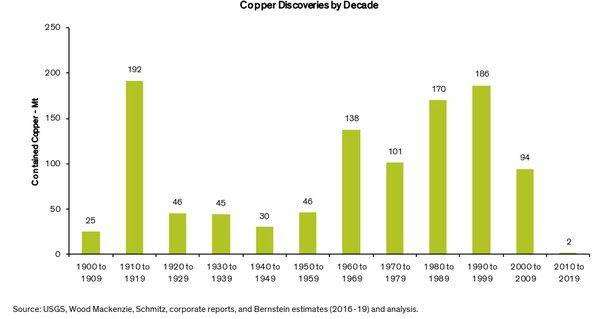 You know what this means — if ore falls from 1% copper grade to 0.5% copper grade, then twice as much ore must be mined and milled –a doubling of effort and the time to produces.

The supply challenges are serious and they cover all time spans.

Back to Goldman Sachs…who say that going into 2021, the copper market is already facing the tightest market conditions in a decade, owing to a substantial inventory deficit (327kt).

So there are definitely short term supply problems.  You can already see it in the price of the commodity.  The medium and long term supply picture however is much, much worse.
Even as the copper price keeps rising coming up with the amount of new production needed is going to be a challenge.

Bringing new production on-line requires a significant amount of time.  We are talking about massive capital projects that can require anywhere from 6 to 10 years from the time the project is approved until when we see first production.

To get the copper that is needed to supply the Green Revolution the world is going to need a much higher copper price to incentivize the work.

Do Not Miss My E-Mail Tomorrow!!!

We are nine months into this copper rally.  The last two big runs in the metal both lasted more than two years.

But this copper bull market is very different.  It is much bigger. The demand for copper that is going to be coming from wind, solar, electric cars, renewable infrastructure is a GAME CHANGER.

Again the equation is simple:

And renewable growth is headed straight up and to the right for years — perhaps decades to come.

Getting long this trade is a no-brainer and tomorrow I’m going to give you one of the highest leveraged investments to do it with.

It’s a copper exploration play with a discovery hole already in place.  Further results—due out shortly…could give this company THE MOST LEVERAGE to the ULTIMATE SUPER CYCLE in copper that the green revolution is about to unleash.

Be ready for my e-mail tomorrow morning.