As we know from Tesla’s Q2 2020 shareholder letter and 10-Q, Tesla plans to produce the Model Y and Cybertruck at its Texas gigafactory near Austin, which is currently under construction. Tesla CEO Elon Musk has also said that the Model 3 will be produced there for the eastern half of the United States, but it is (confusingly) not mentioned in those documents above. Further, the Tesla Semi is expected to be produced at Giga Texas. However, that is also not mentioned in those documents and there is no mention beyond “United States” of where the Semi will be produced.

Now we have one more product to include under Giga Texas’ purview — batteries. Again, this was expected, but now we have some more evidence of it due to some Bloomberg reporting. In a 188-page air-quality permit application that Tesla filed with the Texas Commission on Environmental Quality (TCEQ), Bloomberg spotted this line: “The facility is proposing to operate a cell-manufacturing unit to produce the battery packs that are installed in the vehicle.”

“The filing with the Texas regulator in July was part of a permit-by-rule registration process allowing the company to construct equipment for use at the manufacturing facility. GHD Services Inc. submitted the registration on Tesla’s behalf,” Bloomberg notes.

We’ve put a lot of virtual ink into explaining and speculating about Tesla’s battery plans following its thorough, mind blowing Battery Day presentation. Batteries are a core part of Tesla’s plans for the future, and may be considered one of the two most important focal points for the company. Tesla intends to produce 3 terawatt-hours (TWh) of batteries a year by 2030, which is more than the battery experts at Benchmark Minerals expected the whole world to be producing by 2030. Its 10 gigawatt-hour (GWh) “pilot factory” in Fremont, California, would be the 13th largest battery factory in the world if it went fully online today, but it’s considered a baby plant because Tesla plans to produce 200 gigawatt-hours of batteries a year by the end of 2022. Note that global lithium-ion battery cell production last year was ~180 GWh. In other words, Tesla’s battery production plans are ginormous.

In fact, by 2030, Tesla plans to produce approximately 17× more lithium-ion batteries per year (in terms of energy storage capacity) than the whole world produced in 2019.

For more specifics on how the battery portion of new Tesla vehicles should be designed and how it will be integrated into future Tesla vehicles, see: “Tesla’s New Structural Battery Pack — It’s Not Cell-to-Pack, It’s Cell-to-Body.” This entails a dramatic, “revolutionary” (as Tesla execs Elon Musk, CEO, and Drew Baglino, CTO, have called it) change in vehicle design, vehicle production, and battery pack design and production. Additionally, it further explains why co-locating vehicle and battery production processes is so useful in the coming iterations of Tesla’s top selling vehicles. 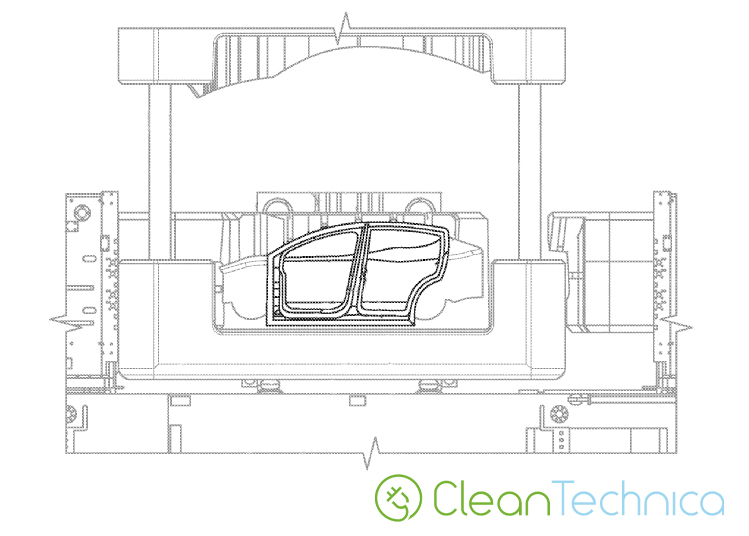 It will be highly ironic, and perhaps fitting and helpful for US society, to see the company leading the transition to electric vehicles building record numbers of batteries and electric cars, trucks, and SUVs in a state known internationally for its oil & gas industry. As that fossil industry is suffering, being knocked backwards by Tesla more than any other company, Tesla is actually in its backyard building out the foundation for what could become the largest building in the world, and potentially hiring blue-collar workers who once upon a time thought they’d work at an oil & gas company for the rest of their careers.

All images are Tesla images improved, enhanced, or turned into GIFs by Chanan Bos/CleanTechnica