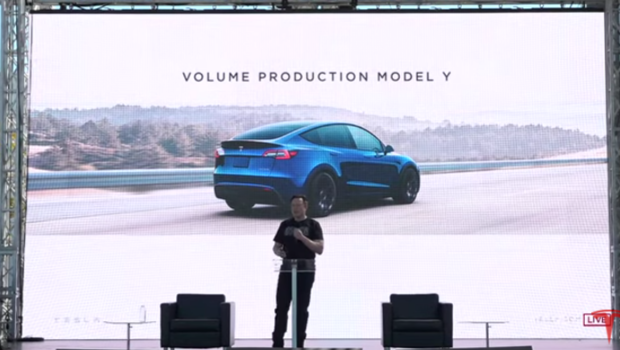 During Tesla’s annual shareholder meeting this week, Elon Musk shared that out of all the launches so far, the launch of Tesla’s Model Y was the smoothest. This year has been rather hard for many, but Tesla started off on a great foot and was able to take on the challenges of 2020 seemingly with ease — in comparison with the struggles of its competitor industry, the fossil fuel industry, that is.

“I think it’s been an incredible year, and I’d like to thank you for your support,” Elon Musk said amidst a sea of honking cars.

The only way for Tesla to even have its shareholder and Battery Day event during a global pandemic was for the company to do what it always does — think (and act) outside the box. The setup was that of a drive-in movie theater. I found it pretty hilarious that Elon Musk was talking to an audience of honking cars — cars that were provided by Tesla as a safety measure to prevent the spread of Covid-19. I’m sure I wasn’t the only one laughing about that.

In the past year, Elon explained, Tesla reached volume production of the Model Y almost silently, and surely without all the drama of the Model 3’s production ramp up. “This was the smoothest launch that we’ve ever had. So I think we’re definitely getting better at new vehicle launches, building factories and scaling production. As you’ve heard me say before, the hardest thing is scaling production, especially of a new technology — it’s insanely difficult. Making a prototype is relatively easy.”

CleanTechnica was actually the first to share news of the Model Y’s very early launch, two months before Deutsche Bank reported something similar.

Elon went on to share that Tesla’s greatest achievement is that it is the first American company in a century to have reached both volume production and become sustainably profitable. This is something the American auto industry hasn’t seen since the 20th century. “This has not happened in 100 years,” Elon said.

Tesla has had a lot of achievements, many of which are often overlooked. I think that is probably due to the large industries Tesla is challenging, along with Elon Musk himself. The fact that we have an American carmaker that has achieved virtually the impossible shouldn’t be overlooked.

They say actions speak louder than words, and Elon often backs his words up with big actions. But it appears critics don’t actually pay attention to what Elon Musk is doing.

Tesla isn’t just a car company. It isn’t just an energy company either. Tesla is creating a new market — and analysts, as usual, don’t know what to make of a new market.

When Down, The Only Way Is Up

When Tesla was at its most challenging point and going through production hell, as Elon Musk described it, the only way was up or forward. This period of time is helped Tesla to sharpen itself into the profitable cutting edge company it is today.

Tesla’s speed at taking on what seem like impossible challenges not only terrifies some of Elon’s critics and skeptics, but it forces them to admit to themselves that it actually is possible to achieve such great things. I think this places their own fears in front of them — whatever those may be — which they project onto the world.

Risks are scary. Tesla doesn’t seem to think twice before it takes one on, though, and this is perhaps why the company succeeds — because it knows it can, and it finds a way. The good news is: Tesla’s achievements are not just achievements to be celebrated by Tesla shareholders and supporters. They are for anyone who cares about our environment, about our climate, and about our future as humans.