Oil and gas company Apache, with its partner Total, is on the hunt for its fourth offshore oil discovery in Suriname.

The company has this year announced discoveries at Sapakara West, and Maka Central, and most recently, Kwaskwasi well – all in Block 58.

Apache has said that the block comprises 1.4 million acres which offer significant potential beyond the already made three discoveries and that the company has identified at least seven distinct play types and more than 50 prospects within the thermally mature play fairway.

In a statement on Thursday, Apache said it had spudded this year’s fourth well  – the Keskesi East-1 – using the Noble Sam Croft drillship.

The Keskesi East-1 exploration well is being drilled approximately 14 kilometers (9 miles) southeast of Sapakara West-1. The offshore well will test upper Cretaceous targets in the Campanian and Santonian.

The working interest split might soon change as Suriname’s state-owned oil company Staatsolie is looking to farm into the offshore block, as well. Staatsolie, according to Reuters, has the right to a stake of up to 20% in the block. The farm-in would cost it up to $1.5 billion, according to recent remarks made by the company’s acting general manager Agnes Moensi-Sokowikromo.

As previously reported, Apache in July announced the Kwaskwasi-1 discovered hydrocarbons in multiple stacked targets in the upper Cretaceous-aged Campanian and Santonian intervals. The well encountered 278 meters (912 feet) of net oil and volatile oil/gas-condensate pay, and was described by Apache’s CEO  as “the best well we’ve drilled in the basin to date, with the highest net pay in the best quality reservoirs.”

“Since the discovery announcement on July 29, 2020, the Noble Sam Croft drillship has gathered reservoir and other technical data in the Santonian. The company was able to successfully retrieve rotary sidewall cores but was unable to collect representative fluid samples from the reservoir due to conditions caused by cementing operations, which were required to mitigate increased pressure below the base of the Santonian formation. Hydrocarbon shows were observed in the Santonian reservoirs, and the results of the formation evaluation indicate the presence of oil,” Apache said.

In early 2021, Apache plans to carry out an appraisal campaign to better characterize the 2020 discoveries, along with an additional exploration campaign.

It’s not just Apache who will drill for oil off Suriname next year. London-listed oil company Tullow Oil will be hoping to replicate Apache’s success at its Goliathberg-Voltzberg North prospect (GVN-1) in the Block 47 next year. The company has recently hired the Stena Forth drillship for the operation.

Worth noting, oil giant Shell also recently entered the Suriname offshore oil and gas sector after buying a package of Kosmos Energy’s frontier exploration assets, including a 33 percent stake in Block 42 in Suriname.

The wider Guyana basing has been described as the world’s number one offshore exploration spot. The region has been put on the exploration map by ExxonMobil, which has, in recent years, discovered more than 8 billion barrels of oil equivalent and has earlier this month announced its 18th oil discovery in the Stabroek block in Guyana.

Oil explorers in Suriname believe what Exxon has done in Guyana can be reproduced in Suriname. Exxon has also added to that belief by recently farming into Petronas’ offshore block in Suriname. 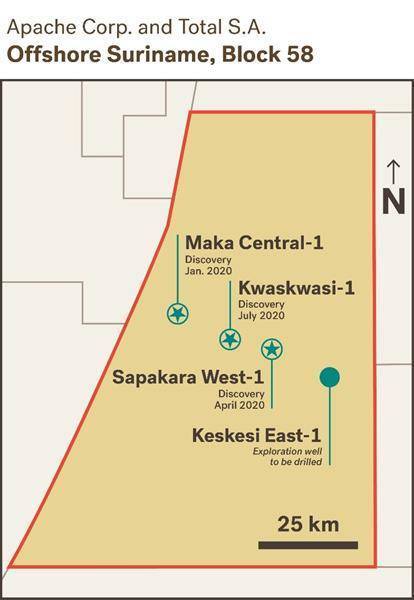