CALGARY, AB – Surge Energy Inc. (“Surge” or the “Company”) (TSX: SGY) is pleased to announce its financial and operating results for the quarter ended June 30, 2020.

When oil prices were over US $63 WTI in late 2019/early 2020, Surge systematically layered in WTI crude oil hedges in order to lock-in 2020 oil prices at attractive, pre-COVID levels. As two Black Swan events (i.e. COVID-19, and the Saudi/Russia oil price war) occurred simultaneously in 1H/20, causing crude prices to drop to US $11.57 WTI per bbl on April 21, 2020, Surge management acted decisively to preserve stakeholder’s capital by:

In 1H/20, managements strategic hedging program worked very well, with Surge reporting a realized hedging gain of $29 million. Accordingly, Surge was actually able to reduce net debt1 in both Q2/20 and 1H/20 – during the COVID-19 crisis, and during the Saudi/Russia crude oil price war.

COVID-19 fears, the Saudi/Russia oil price war, and the subsequent spike down in world crude oil prices in 1H/20, triggered significant, world-wide upstream capital spending reductions for crude oil drilling and associated projects both large and small. In this regard, US and Canadian oil rig counts plunged to multi-decade lows in June/20:

*This news release contains multimedia – to view the full PDF version as it is intended, please click here* 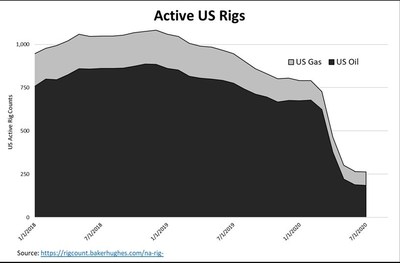 Crude oil prices have now risen by more than 240 percent in just the last 3.5 months to approximately US$40 WTI per bbl, and the 2020 forward strip for oil prices has moved up in tandem to US$41 per bbl.

Against this backdrop of crude oil price fundamentals improving, it is important to stress that Surge possesses 3 of the key operational indicia for highly successful oil companies, namely:

While the COVID-19 crisis and the Saudi/Russia crude oil price war drove WTI crude oil prices to an average of US$27.85 per barrel in Q2/20, Surge was actually able to reduce net debt in Q2/20, as well as 1H/20.

With crude oil prices having increased more than 240 percent from the April 21, 2020 low of US$11.57 WTI per barrel, Surge began to bring curtailed production back on in June. Management’s expectation is that, based on current oil prices, the Company will have virtually all curtailed production back on by mid-August. Surge’s ability to restart production is not simply due to increasing oil prices, but also driven by field cost optimization work (i.e. lowering the break-even price for several of the Company’s higher cost properties).

Surge is currently participating in (or exploring) all applicable Government assistance programs relating to the COVID-19 pandemic. The Company has received $2.9 million for the Alberta Site Rehabilitation Program (“SRP”).

Surge remains committed to its own internal ESG initiatives and currently expects to spend an additional $2 million in 2H/20 (over and above any grants received through the SRP).

Surge’s Sparky play has now emerged as one of the premium, conventional, medium/light crude oil growth plays in Canada. The Company has now drilled 138 consecutive successful horizontal Sparky wells4, and grown production in its Sparky core area by more than 650% from 1,200 boepd (95% oil) to more than 9,000 boepd (95% oil), over the last 6 years.

In Q4/19 and Q1/20 Surge drilled a combined total of 27 Sparky horizontal wells, and the average from these wells is outperforming the weighted average of the Company’s independently engineered Sproule type curve. The Company has also recently completed an internal technical review which determined that production from the 200m infill Sparky horizontal wells is statistically identical to that of the original primary wells that were spaced at 400m. Surge’s Sparky drilling results are set forth below:

*This news release contains multimedia – to view the full PDF version as it is intended, please click here* 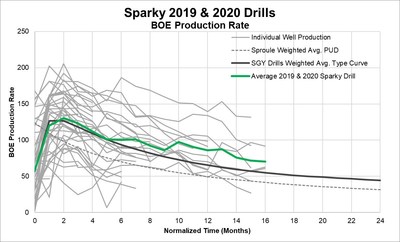 Due to the Sparky’s large OOIP per section, shallow depths, and low on-stream costs, a Sparky well generates a risked rate of return of 145% (undiscounted) at US$45 WTI per barrel flat pricing5.

At the Valhalla core area, in Q4/19 Surge drilled the Company’s first Montney horizontal well into Surge’s large OOIP Montney turbidite pool – which is a conventional light oil pool. This well had an IP30 oil rate of more than 1,000 bopd, has cumulative production of over 132,000 barrels of oil in 6 months (IP 180 of 735 bopd), and continues to produce at more than 500 bopd today.

Surge has a number of follow-up Montney turbidite locations at Valhalla.5

In 2019, with US WTI crude oil prices averaging US$57 WTI per bbl, Surge maintained the Company’s annual production (cost effectively), paid its prior dividend (using just 17 percent of the Company’s adjusted funds flow6), and reduced net debt by $79 million.

Today, crude oil prices are up over 240 percent in 3.5 months to approximately US$40 WTI per barrel, and strip oil prices have moved up in tandem to US$41 per barrel.

In response to the rapidly evolving COVID-19 pandemic, Surge has taken appropriate steps to protect its staff, their families, service providers, stakeholders, and the general public. Health and safety is our number one priority and we have a dedicated team working on proactive measures to limit COVID-19 from negatively impacting our employees and business.

Surge has taken steps to slow the spread of the virus, including heeding the government’s advice for physical distancing. We closed our Calgary office for over three months and staff seamlessly transitioned to working remotely. Staff have now returned staff to work at the office with safety measures in place.  We have mitigation plans in place for all field operations staff across Western Canada. These measures protect their health while they work diligently to ensure the safety and security of our facilities as well as continuing to deliver reliable production. In addition, Surge has proactively implemented enhanced cleaning and sanitation measures at all company work locations.

We are continuing to monitor the situation, taking guidance from health authorities, and looking for opportunities to participate in any activities that will slow the spread of the virus and “flatten the curve”. We thank our staff, their families, our partners, and the communities in which we operate, for their participation in these proactive measures.