Scientists from the ECMWF Copernicus Climate Change Service reveal that globally September 2020 was 0.05°C warmer than September 2019, previously the warmest on record, making it the world’s warmest September so far. Meanwhile, temperatures in the Siberian Arctic continue to be much above average and Arctic sea ice is at its second lowest extent since satellite records began. 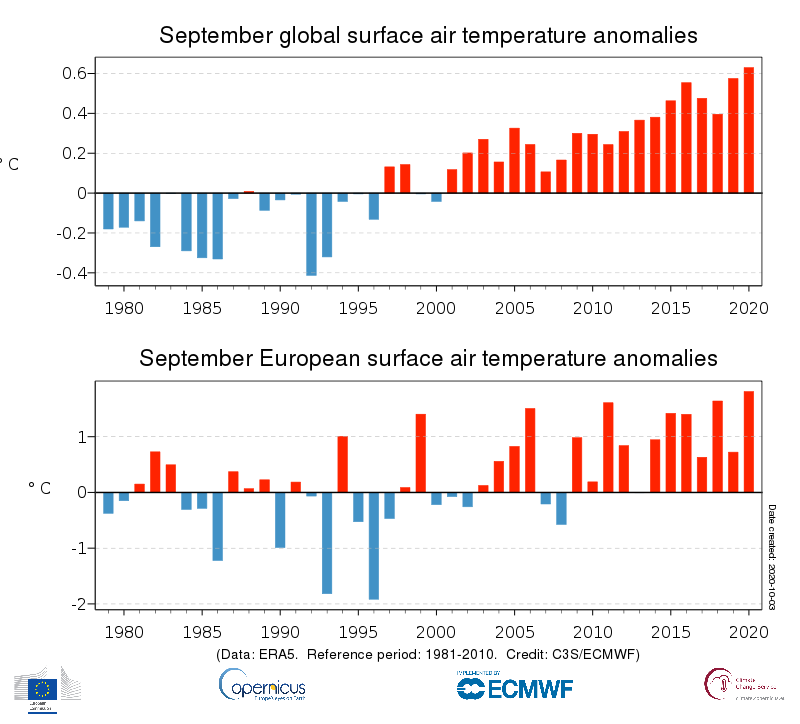 Time series of global-mean and European-mean surface air temperature anomalies for all Septembers from 1979 to 2020. Anomalies are relative to the 1981-2010 reference period. Data source: ERA5. Credit: Copernicus Climate Change Service/ECMWF.

The Copernicus Climate Change Service (C3S) this week announces that global temperatures for September 2020 were higher than in any previous September on record. C3S reanalysis data show that the month was 0.63ºC above the average September temperatures of the standard thirty-year climatological reference period (1981–2010). This makes September 2020 0.05°C warmer than September 2019, and 0.08°C warmer than September 2016, previously the warmest and second warmest Septembers. C3S is implemented by the European Centre for Medium-Range Weather Forecasts (ECMWF) on behalf of the European Commission, and monitors global and European climate.

C3S scientists further reveal that both 2016 — the warmest calendar year recorded to date — and 2020 currently show little deviation in terms of year-to-date figures, meaning that the average global temperature anomalies between 1 January and 30 September of these two years are fairly similar.  2020 is warmer than 2019 for the same period; climate patterns such as La Niña will influence whether 2020 becomes the warmest year on record.

In the Siberian Arctic, temperatures continued to be warmer than average in September, continuing a warm spell that has affected different parts of the vast region since early spring. Although Siberia and the Arctic have large temperature fluctuations from year to year, the relative warmth observed this year has been unusual in its magnitude and persistence.

C3S also monitors sea ice on a monthly basis and their data confirm that the average Arctic sea ice extent for September was the second lowest recorded, after September 2012. In the Arctic, sea ice extent has declined markedly since 1979 when satellite observations began. The trend can be seen for all months of the year but especially in September, the time of year when the ice cover reaches its annual minimum. Due to climatic drivers, the typical annual cycle of sea ice is to decline from early spring until late summer when it reaches the minimum extent for the year, usually in September, after which sea ice starts building up again to reach the maximum, which typically occurs in March.

Carlo Buontempo, Director of Copernicus Climate Change Service at ECMWF, explains: “In 2020, there was an unusually rapid decline in Arctic sea ice extent during June and July, in the same region where above average temperatures were recorded, preconditioning the sea ice minimum to be particularly low this year. The combination of record temperatures and low Arctic sea ice in 2020 highlight the importance of improved and more comprehensive monitoring in a region warming faster than anywhere else in the world.”

C3S publishes monthly climate bulletins reporting on the changes observed in global surface air temperature and other climate variables. All the reported findings are based on computer-generated analyses using billions of measurements from satellites, ships, aircraft and weather stations around the world.

The map and quoted data values are from ECMWF Copernicus Climate Change Service’s ERA5 dataset, currently dating back to 1979. Anomalies are calculated with respect to the 1981-2010 reference period. Area averages for temperature over the European region are for land only with the following longitude/latitude bounds: 25W-40E, 34N-72N.

More information about climate variables in September and climate updates of previous months as well as high-resolution graphics can be downloaded here: https://climate.copernicus.eu/monthly-climate-bulletins More information on Arctic sea ice and temperatures can be found here: https://climate.copernicus.eu/september-record-breaking-warm-temperatures-low-sea-ice More information about the C3S data set and how it is compiled can be found here: https://climate.copernicus.eu/climate-bulletin-about-data-and-analysis