The IGM/Fivethirtyeight Round 7 survey is out, with discussion here. The poll results are here. Below are some forecasts and nowcasts to consider. 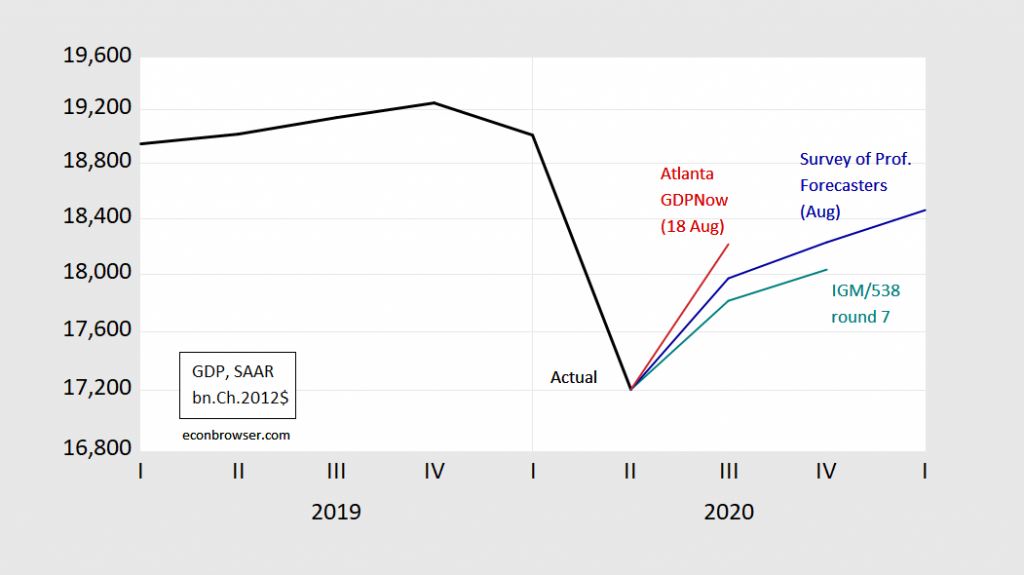 Note that the IGM/Fivethirtyeight forecast is not strictly comparable to the SPF because it relies on median growth rates rather than mean growth rates. For 2020Q3, this is probably not a big deal as the distribution looks (as far as I can tell) pretty unskewed. However, the 2020Q4 distribution looks like there are some really high forecasts (90th percentile is 10%, 10th percentile is 4%, median is 5%, SAAR). Hence, the median and mean probably differ more.

Compared to the last round of forecasts (discussed here), the IGM/Fivethirtyeight panel has become slightly more optimistic. However, overall, they remain more pessimistic than the Survey of Professional Forecasters. The Atlanta Fed nowcast (GDPNow) as of August 18 is more optimistic, while the NY Fed’s nowcast (not shown) pretty much forecasts the same level of GDP for Q3 as the IGM/Fivethirtyeight’s.

The survey respondents also predict a long slog ahead for recovery even if a vaccine is developed, as described in the Fivethirtyeight article:

…even the consensus predictions for the rosiest scenario — which could, in reality, take months or years to emerge — weren’t actually that optimistic. In that fantasy world where 75 percent of Americans wake up tomorrow and are certifiably immune to the coronavirus, the economists thought there was only a 15 percent chance that GDP would return to its pre-pandemic level by the end of 2020, and only a 35 percent chance that GDP would hit that mark by the end of the first quarter of 2021.

Looking farther ahead, the panel has a modal prediction of output recovering to 2019Q4 levels in 2022H2, which matches the modal response in the National Association of Business Economics (NABE) survey, discussed in this Axios article.