By Jerri-Lynn Scofield, who has worked as a securities lawyer and a derivatives trader. She is currently writing a book about textile artisans.

The Pew Charitable Trust and  Systemiq Ltd., a sustainability consulting firm, have released a new study reporting that plastics in the world’s oceans could triple by 2040.

Nearly 13 million metic tons of plastics find their way into oceans every year, or the equivalent of one garbage trunk of such waste is dumped into the sea every minute. Current commitments would only reduce this projected volume by 7%. 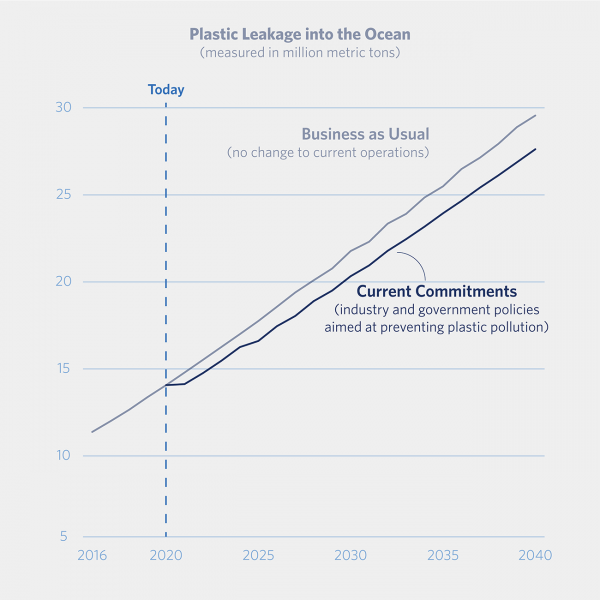 Yet the study Breaking the Plastic Wave: A Comprehensive Assessment of Pathways Towards Stopping Ocean Plastic Pollution. also spells out some immediate measures, based on current technologies, that if implemented immediately, could cut this projected volume by 80% (for a short version, see summary).

Now, recently both China and India have announced their own versions of single-use plastics bans. Kudos to both. Maybe those moratoria will make some difference.

Alas, the COVID-19 crisis  may upend these efforts, as throughout the world, we are eschewing plastics-free (or plastics-less markets) in favour of other “sanitary” options – which involve swathing in plastic. And I like so many others have been making more on-line- purchases where the retailer encases products in plastic clamshells before delivering them to me on my doorstep. Whatever happened to good old paper bags?

The plastics pushers are only ramping up their plants to produce more plastics – which given that as I’ve written before, the recycling fairy is a fairy – and who believes in those? – all this crap only finds its way into the world’s oceans, or there and elsewhere, decays to microplastics, the health effects of which we remain largely unaware.

Although there is no single solution to the present crisis, a combination of eight measures, if implemented widely, could drastically alleviate the current crisis. I reproduce the study’s proposed solutions here, so readers can see how sensible they appear. I am not very hopeful they will be implemented, especially as there has been a huge ramping up in U.S. production capacity recently. Investments have been made, and in the face of the oil price collapse, I think it unlikely that plastics pushers will roll over and allow their investments to be stranded.

But I can dream, can’t I? Here are the recommendations in graphic form, according to Breaking the Plastic Wave: Top Findings for Preventing Plastic Pollution). 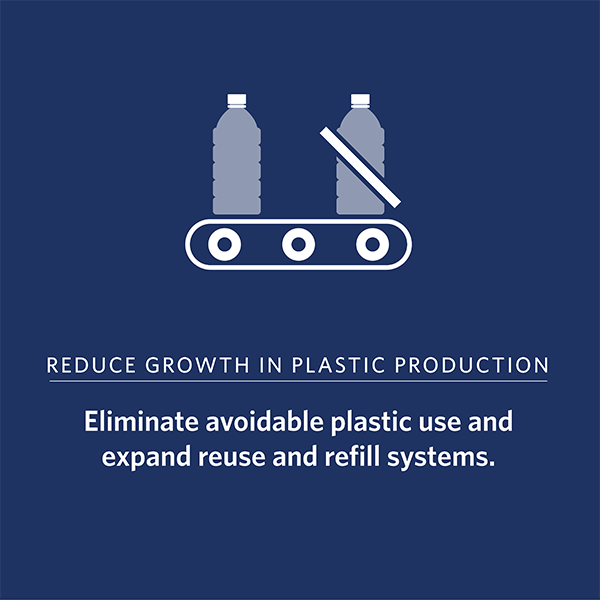 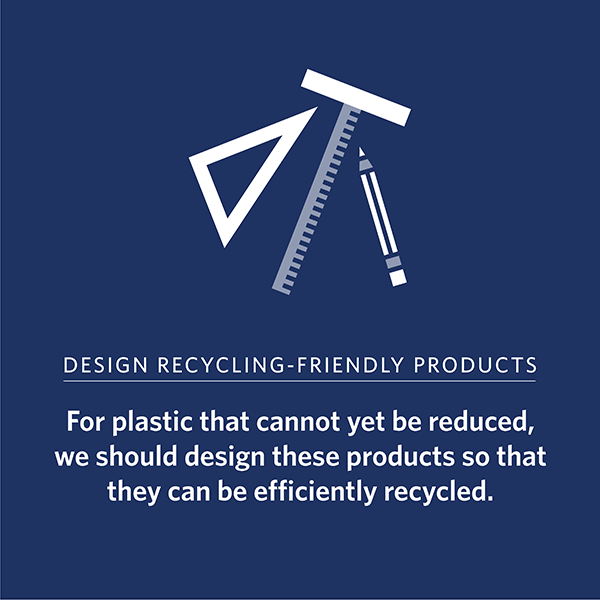 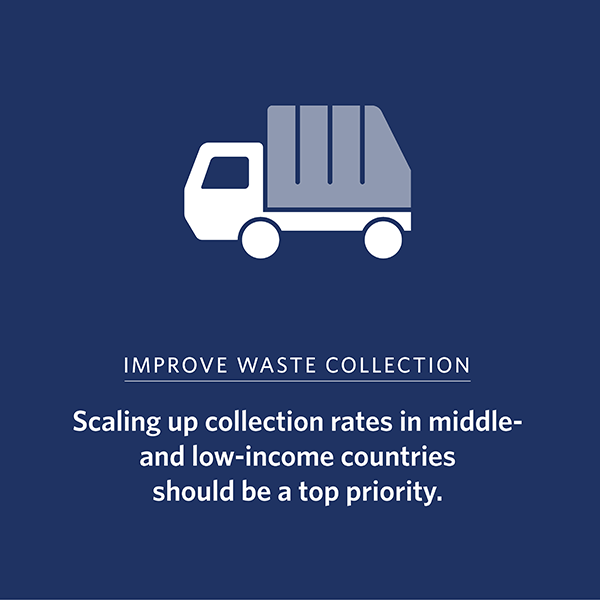 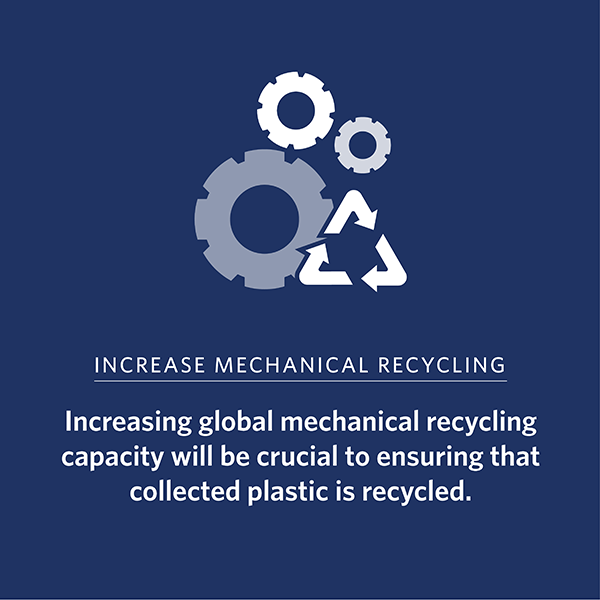 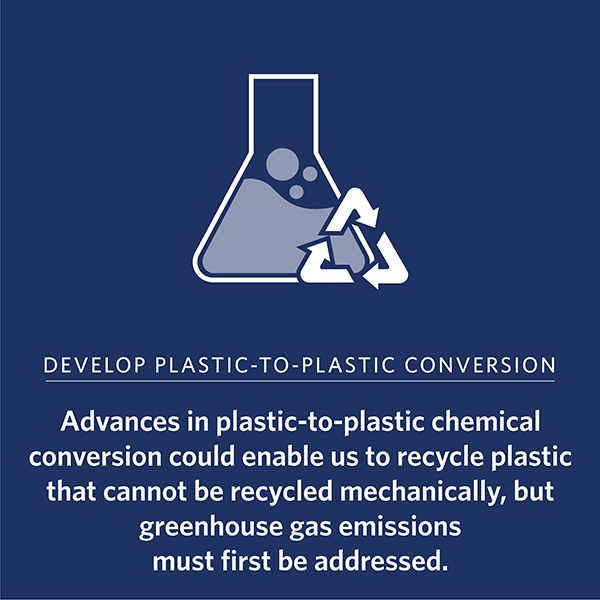 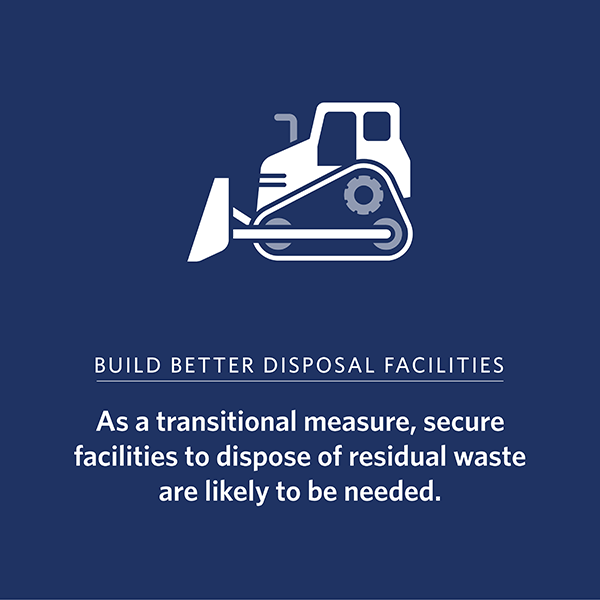 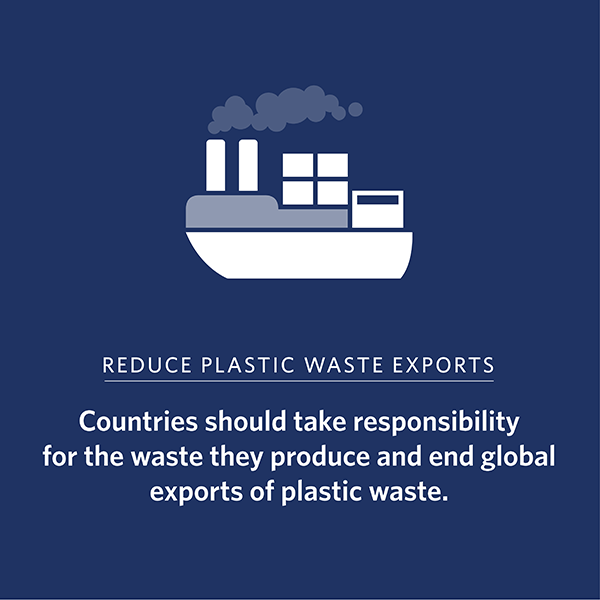 Before the COVID-19 crisis, public concern was growing about the inevitability and desirability of plastics – partly as a result of Sir David Attenborough’s 2017 remarkable award-winning documentary, The Blue Planet. This shift was occurring ntw only throughout Europe, but also in developing countries as well. Regular readers will recognise that I’ve highlighted how important China’s decision to stop accepting the world’s waste for recycling in 2017 was.

Initially, other developing counties picked up the slack in world waste exports (see Waste Watch: US Dumps Plastic Rubbish in Southeast Asia). Yet then they, too, started to realize they did not want to serve as the world’s dumping ground and have indeed begun to ship some waste imports back to the country of origin (see Recycling Woes: Indonesia Sends Waste Shipment Back to Australia).

To my mind, I believe there is still too much emphasis placed on recycling junk – rather than drastically curtailing production in the first instance. I’m not the only one to see the problem in these terms, either, as the Wall Street Journal reports in Ocean Plastic Is Getting Worse and Efforts to Stem the Tide Fall Short, Study Finds:

Consumer and regulatory pressure has prompted many of the world’s biggest consumer-goods companies to commit to making all their packaging reusable, recyclable or compostable within the next five years. Businesses have also pledged to use more recycled content in their packaging, often touting such promises to woo shoppers.

Waste-reduction advocates say those commitments aren’t enough because they focus on recycling plastic, rather than making and using less of it. Companies like Walmart Inc., Nestle SANSRGY 1.37% and Procter & Gamble Co. PG 0.29% say they plan to eliminate unnecessary packaging and use more refillable containers, but few have set measurable targets for doing so.

“This is a dream we will have to give up that we can continue to grow plastic output infinitely and see collection and recycling systems easily pick up with it,” said Martin Stuchtey, head of Systemiq.

Now, all these initiatives will cost money. But they also save some money, create jobs, and most importantly, preserve the planet. And a point I’ve made before  but cannot emphasize enough:  creating unnecessary, wasteful, plastic crap actually exacerbates global warming, as the Guardian recognizes in Plastic waste entering oceans expected to triple in 20 years:

Such measures would require an investment of about $150bn globally in the next five years, but would yield $70bn in savings compared with the $670bn cost to governments of inefficient waste management between now and 2040, while cutting the greenhouse gas emissions associated with plastic by about a quarter, and creating as many as 700,000 jobs.

So far, the measures already undertaken are clearly inadequate. Part of the problem is that currently it is cheaper to produce virgin plastic than to reuse or refill existing material. According to the Guardian:

Despite rising public awareness of the plastic problem in the past five years, attempts to cut waste through plastic bag charges and bans on certain forms of microplastics have so far had little impact, said Simon Reddy, international environment director at the Pew Charitable Trusts, which led the research. “All the initiatives to date make very little difference. There is no silver bullet, there is no solution that can simply be applied – lots of policies are wanted. You need innovation and systems change.”

Such change will require governments to overhaul their waste systems particularly, but also to look at ways to design plastic waste out of products. But action was needed urgently, he said, as once plastic reached the sea it was almost impossible to get it out again.

“That there is likely to be three times more plastic waste by 2040 is a shocking revelation,” he said.

Reddy called on governments and investors to curb the planned expansion of plastic production. “Without this, the supply of large quantities of cheap virgin plastic to the market may undermine reduction and substitution efforts and threaten the economic viability of recycling, while making it even harder to close the collection gap [between waste produced and waste collected for disposal].”

Governments must also create incentives for businesses to adopt new models such as reuse and refill systems, he urged. “[That would] level the playing field, where currently virgin plastic feedstock has a cost advantage over recycled materials.”

New design standards would also be needed, and better collection systems in low- and middle-income countries.

Will we wake up in time to prevent drowning in the stuff? The one thing that cheers me a bit is to see the bans on single use plastic that are emerging in places like China and India. Yes, I understand the considerable problems both places have with their waste management policies: there’s a huge gap between rhetoric and reality. And COVID-19 has proven to be a considerable setback, as LiveMint reported earlier this month, How covid-19 is reversing the ban on single use plastic across India.

But in large parts of the US, even before the onset of the pandemic, we couldn’t even take this simple step. COVID-19 has revealed another weakness in relying on the recycling fairy:  Collecting and sorting plastic waste is another way to spread the disease. Many  places that still had recycling programs have shuttered them. I doubt we’ll see strong reemergence of such policies once the pandemic is quelled, either.

What must be done is clear. Will we manage to do so? Or will we continue to allow plastic pushers to set our waste management agenda?