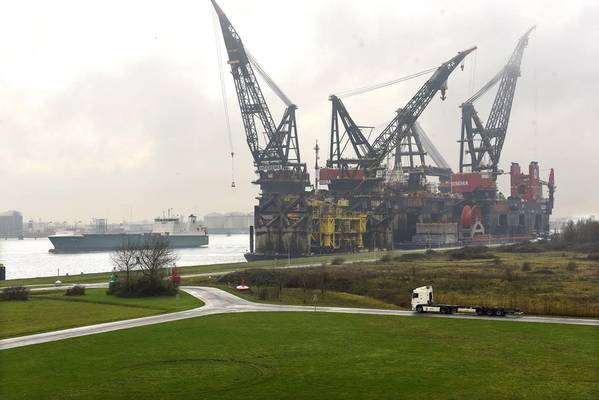 On Saturday, 5 December, the crane vessel Thialf arrived alongside the Sleipnir at the Landtong Rozenburg (Rozenburg Spit), after a journey across the Atlantic from Canada, where it had worked on Exxon’s Sable decommissioning project.

The Sleipnir – the largest semi-submersible crane vessel in the world – was put into service at the end of last year. In March, the LNG-powered vessel arrived in Rotterdam for the first time. The giant crane vessel has had a busy season in Europe, removing old and installing new oil and gas platforms, as well as installing offshore wind components.

Sharing the photo of the meet-up of the two giants, the Rotterdam Port Authority also used the opportunity to mention that Eneco, Heerema and the Port Authority are working hard on installing shore-based power for Heerema’s berth on the Landtong.

It is expected that the vessels will be able to connect to the shore-based power in spring.