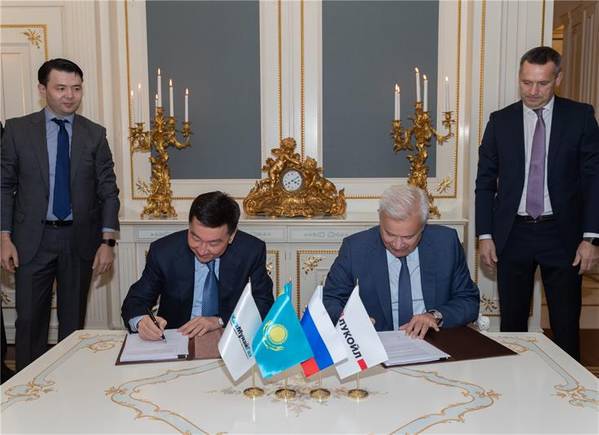 Russian oil company Lukoil has signed an agreement with the Kazakh oil firm KazMunayGas over the future obligations of the two companies on the Al-Farabi Project in the Kazakh Sector of the Caspian Sea.

Al-Farabi license block is located in the Kazakh Sector of the Caspian Sea, 100 – 130 kilometers away from the shore with the water depth of 150-500 meters. The license block covers over six thousand square kilometers. The water zone remains ice-free all year round.

According to Lukoil, the agreement signed between the two companies defines the rights and obligations of Lukoil and KMG as future license holders under the Al-Farabi project ( formerly I-P-2 license block).

The agreement was signed by President of Lukoil Vagit Alekperov and Chairman of the Management Board of JSC NC KazMunayGas (KMG) Alik Aidarbayev.

“This is a next step after the principles agreement, concluded in June of 2019. The parties intend to proceed with signing a contract on exploration and production of hydrocarbons, that will come into force as soon as KMG receives the license and the parties close the deal to establish a joint venture with 50.01% (KMG) and 49.99% (LUKOIL) shares,” Lukoil said.

The two companies are already partners in other major projects such as – Karachaganak, Tengiz, Kumkol, and in the oil transportation project of the Caspian Pipeline Consortium.

Also, the Ministry of Energy of the Republic of Kazakhstan, KMG and LUKOIL signed an agreement to explore and produce hydrocarbons at Zhenis offshore block on April 1, 2019.