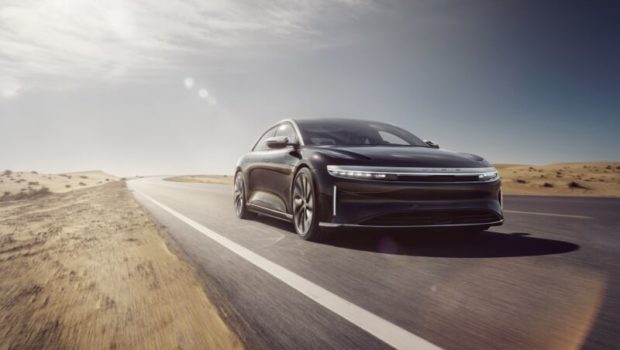 Lucid Motors says its first production car, the Lucid Air, will charge faster than any other production car on the planet, making it able to add 300 miles of range in as little as 20 minutes using a Level 3 DC 350 kW fast charger. Lucid has formed a partnership with Electrify America which will allow its customers 3 years of free charging at any one of more than 2000 EA charging stations across America. Only a select number of EA charge points will be rated for 350 kW of power. The majority will be 150 kW chargers. [Note: the free charging only applies until the battery reaches a 100% state of charge. After that, fees may apply if the car is left connected to the charger.] In a press release, Lucid attributes its fast charging capability to its passion for efficiency. It recently announced that an independent testing company found in the Lucid Air has a range of 517 miles using the EPA test protocol. [It is important to note the EPA has not yet rated the Lucid Air officially and that the model tested was probably not the entry level version of the car.]

“This new benchmark for speed of charging is possible through an ultra-high 900V+ electrical architecture, custom lithium-ion battery cells, a highly sophisticated battery and thermal management system, and the Lucid Air’s incredible powertrain efficiency. This efficiency plays a direct and invaluable role in the Lucid Air’s charging rate, determining the rate of mileage as distinct from the rate of energy flow,” the company says.

“We designed every aspect of the Lucid Air and its platform in-house to be hyper-efficient, from the powertrain to the aerodynamics, and we’ve set several new benchmarks through these efforts including the longest range EV with an estimated EPA range of 517 miles,” says Eric Bach, vice president of hardware engineering. “With our ultra-high voltage 900V+ electrical architecture and the proprietary Wunderbox, we have significantly increased the speed of energy getting into, around, and even out of the vehicle, delivering the world’s fastest charging EV packed with future-ready charging features.”

There’s another important bit of news in that Lucid press release. The aforementioned Wunderbox — Lucid’s proprietary charger for residential use — is capable of feeding power from the car’s battery back to the owner’s home, meaning it can be used as a backup power supply. Or, the company says, it could power an off-grid vacation home like a cabin in the woods. That will make the Lucid Air one of  the first cars sold in America suitable for vehicle to grid (V2G) or vehicle to vehicle (V2V) use.

Lucid also intends to offer residential energy storage systems using its proprietary battery technology. The company, which began life as Atieva in 2007, is now the sole supplier of batteries to the Formula E racing series, so it knows a thing or two about batteries and energy storage. The company says it “is developing static Energy Storage Systems (ESS) using its in-house battery, power electrics, and its renowned battery management system (BMS) software technology to develop the building blocks of advanced energy storage. It’s a way for Lucid to create a sustainable life cycle for re-purposing Lucid Air batteries, as well as contributing to a world where sustainable storage of energy will have tremendous advantages for peak usage, balanced grids, cost savings, and for the environment.” A prototype of the ESS system has been installed at Lucid headquarters in California, where company engineers are working on making a range of ESS products ready for production.

Lucid Is Locked And Loaded

The future is always hard to predict, but Lucid seems to have its ducks all in a row. The official unveiling for the Lucid Air is scheduled for September 9 and CleanTechnica will have boots on the ground for that event. It has a car with 100 miles more range than its closest competitor, the Tesla Model S and with faster charging. The Air can gain 20 miles of range in one minute, the Tesla “only” about 15 miles, although it seems unlikely many buying decisions will be based on that metric alone.

It will offer V2G and V2V capability using the CCS connector that is rapidly becoming the standard of the industry, at least in North America and Europe. It is working on residential energy storage. The company’s first factory is nearing completion in Arizona. And the company readily admits the Air — like the Model S — is a range topping model designed to attract attention and put some cash in its corporate coffers so it can turn it can focus to other less expensive models for the mass market.

Elon Musk has always said he wants other manufacturers to offer competitive electric cars. The Lucid Air may be the closest thing yet to being just that. There is even talk around the water cooler at CleanTechnica’s intergalactic headquarters that the Lucid Air may be just the prompt Elon and his band of merry pranksters need to finally give the Model S and Model X a thorough refresh. After all, the roots of the Model S are almost a decade old by now. It’s still a great looking car but time marches on and the S is not quite the equal of top of the line sedans from companies like Mercedes, BMW, and Audi, especially when it comes to the luxuriousness of the passenger compartment.

Peter Rawlinson, the CEO of Lucid Motors, was instrumental in getting the original Model S into production and he clearly wants to be a bit of a thorn in the side of Musk and Tesla. We should know soon enough whether the Lucid Air is capable of going toe to toe with the Model S and maybe being just a smidge better.