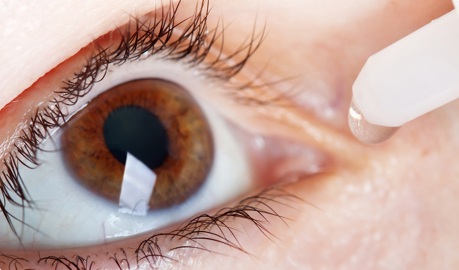 When we bought Aldeyra (ALDX – NASDAQ) in May of last year the stock was $3.50. The analyst price targets were a long way off.

Oppenheimer was the lowest, with a target of $12. Stifel was double that – at $25. Cantor Fitzgerald topped them all with a $33 target.

When I saw those targets, I got interested.  Why?

Because analysts put big targets on little stocks when there is a huge addressable market (known as TAM – the T is for total).

It does not mean the stock will capitalize on that TAM. In fact, most of the high-flying stocks today are running on dreams of multi-billion-dollar TAMs that will never amount to much revenue for them.

But TAM means potential, and especially when it comes to biotech, if you are going to dream, dream big.

At the time the stock was well below where it was pre-COVID (it had been a $6 stock before COVID hit).

There were a few Phase 3 trials set to launch.

While the timeline of those trials would take a hit with the pandemic, nothing was permanently impaired.

Fast forward a year and now the stock is a 3+bagger for me and my subscribers. But if anything, the outlook for Aldeyra is even better than it was. While you have to take some profits on your big winners, there is plenty of reason to believe the stock had further to go.

Aldeyra has been around since 2004.  Their focus has been a molecule called reactive aldehyde species (RASP).

RASP molecules are created by our body. They bind to cells and aggravate them. When they do that, the cells inflame.  RASP causes inflammation.

You cannot really get rid of the RASP molecules. They are part of our make-up. But some people have genetics that make too much of them.

When your body makes too much RASP that leads to diseases. Those are the diseases that Aldeyra is going after.

The basic idea behind nearly all of Aldeyra’s targets is that if you can stop RASP molecules from attaching to cells then you can stop the diseases caused by RASPs.

Aldeyra’s drugs do this by attaching to the RASPs instead. They neutralize them.

There are several different inflammatory diseases related to high levels of RASPs. Aldeyra is going after a few big ones.

The biggest is dry eye disease (DED). It’s a huge market, which I’ll get into shortly. A second is allergic conjunctivitis (AC). Both are already in late-stage trials. Others include psoriasis, atopic asthma, even COVID, as well as a few rare diseases.

The big kahuna is DED.

DED is a massive market. There are 34 million DED sufferers in the United States.  About 20 million of those are diagnosed.

The current standard-of-care options (which includes a Novartis (NOVN – SW) owned drug called Xiidra that I will get back to shortly) cost $500 per month.

If you assume about one-third of sufferers are candidates for a prescription and that they use it for 6 months a year, the overall market size is over $21 billion.

Yes, there will be plenty of competition but that is a huge pie.

Aldeyra is a $500 million company right now. That’s tiny for the opportunity.

Consider Xiidra. Xiidra has been on the market since 2016. The drug did about $400 million in sales last year and looks to be back on track for a similar run rate going forward after experiencing a COVID dip in 2020.

Novartis bought Xiidra from Takeda Pharmaceuticals in July 2019. They paid $3.4 billion in cash and $1.9 billion in potential milestone payments.

There is your upside.

While many stocks are popping on smoke and mirrors, Aldeyra is doing it for a good-old fashioned reason – positive results.

On January 7th Aldeyra announced preliminary results for 12 patients (23 in total including 11 on placebo) in their Phase 3 DED trial called TRANQUILITY.

They are targeting DED with their drug, called Reproxalap, a RASP inhibitor.

This was early data. These first 12 patients will be used to inform the larger TRANQUILITY trial that will begin in February.

The results showed a “meaningful improvement” in DED symptoms.

The results were “statistically significant” across the spectrum of DED symptoms: ocular redness, dryness, and discomfort.

But the biggest takeaway was that Reproxalap works fast – “within minutes of dosing”.

There are a couple of existing treatments on the market (including Xiidra) that Reproxalap will be competing with – each of these takes weeks or months to work.

This is a big problem for existing treatment. Between 50-80% of patients treated for DED drop off between the second and third refill.

These early results show Reproxalap acts MUCH faster – comparable to steroids, but steroids cannot be given on a regular basis while Reproxalap can.

Aldeyra presented results early in 2020 that showed a head-to-head with Xiidra.

Their results showed a significant improvement in redness of the eye as well.

Now keep in mind, these results released two weeks ago just early data. That much larger trial that begins in

February is going to be what the FDA uses to make their decision.

But there is no question that the results are encouraging.

The company is bullish. On the January 7th call, CEO Todd Brady said that he believes Aldeyra has “already achieved the symptom endpoints required for NDA submission”.

DED would be enough to move Aldeyra’s on its own but the company is also in the late stages of targeting another big market – Allergic Conjunctivitus (AC).

It is a big name but essentially this is allergies—allergies that make your eyes red, sore and itchy.

AC effects 100 million people in the United States. There are 30 million of them that do not respond well to antihistamines.

AC, together with DED, are the two largest markets in ophthalmology.

Aldeyra is going after AC with Reproxalap.  Like DED, they are already in a Phase 3 trial. This one is called INVIGORATE.

INVIGORATE is enrolling 100 patients and evaluating ocular itch, the most common symptom of AC.

INVIGORATE is expected to have data in the first half of 2021.

The Phase 2 results look encouraging to a positive Phase 3 result:

There will continue to be a lot of news flow over the next few months. Positive results are going to move the stock higher. A negative hiccup will going to whack at the price.

First on the horizon is RASP data for those early 12 patients in TRANQUILITY.  This will happen by the end of March.

The data we saw on January 7th was all about the symptoms. But Aldeyra is measuring the RASP level in these patients directly. They may decide to seek approval of Reproxalap based on RASP reduction.

Given that the symptoms have declined, you would assume that the RASP levels have to. We also know from Phase 2 trials that Reproxalap worked to lower RASP levels in those patients. All the markers point positively. But we will not know for sure until we see the data.

That is going to follow with INVIGORATE data sometime in the second quarter and then the biggie – the full TRANQUILITY data for the larger patient group in the second half of the year.

If all goes well expect commercialization of Reproxalap in the 2022 timeframe. And expect a higher stock price.

One of the most respected biotech investment firms out there, Perceptive Advisors, recently increased the size of their position in Aldeyra by 40%. They now hold 22% of the company.

Perceptive Advisors purchased a little over a million shares in the two days after Aldeyra announced the positive results from the 23-patient group. This is no coincidence.

They followed this up by purchasing another 1.4 million shares in Aldeyra’s January 13th share offering.

Aldeyra’s share offering priced 6.8 million shares at $9.50. Often a stock will slump after offering shares but in Aldeyra’s case within a day the stock was at new highs.

Oppenheimer estimates that DED could mean $500 million peak revenue (in 2027 mind you) if its approved.

This would be inline with what we see with Xiidra – Oppenheimer put a 4x multiple on that revenue to estimate the unrisked $2 billion market cap from DED alone.

Given that Aldeyra’s enterprise value is still a little under $500 million, you have to think the stock has room to move higher on more positive results.

Novartis took over Xiidra for nearly half that much (more if you include the milestone payments).

The caveat is that the data we saw two weeks ago was from 12 patients. The sample size so far is small.

If data from the larger TRANQUILITY cohort of patients fails or if the results coming out in March do not match expectations the stock is going to fall hard.

Even if approved, there is going to be competition. There are a half dozen molecules in development targeting DED and AC.

Jefferies said that of those molecules, the clinical data for Reproxalap puts it at the top of the list – and that was before the January results.

2021 it is going to be a busy year and hopefully a profitable one. While the stock has been a big winner for us it has much further to go if the data is good.

There are always surprises in drug trials and Aldeyra could fall flat.  But the data that investors are seeing so far looks to me like a very good risk/reward.