Triumph Subsea Services has signed a letter of intent with Infrastrata for the construction of offshore wind farm development vessels at Infrastrata’s Harland & Wolff Shipyard in Belfast, Northern Ireland.

The letter of intent envisions the construction of two Windfarm Development Vessels (“WDV) each of which will have a length of 200 meters and a beam of 35 meters.

Under the terms of the LoI, InfraStrata’s subsidiary, Harland & Wolff – a shipyard that built the Titanic – would be responsible for the build, assembly, and delivery of the WDVs to Triumph.

The LoI initially contemplates the construction of one vessel, with Triumph having an option for an additional vessel to be built at Harland & Wolff (Belfast).

The vessels will come with diesel-electric hybrid engines that will eventually transition into hydrogen fuel cells, offering what management considers to be the “greenest” solutions to wind farm developers.

As multi-purpose vessels, the WDVs will not only be utilized for fixed and floating wind farm installations but will also be capable of sub-sea cable laying and providing marine services for offshore carbon capture and green hydrogen projects, Infrastrata said Thursday.

“In line with the UK Government’s target of having at least 40GW of installed wind capacity, once constructed, the WDVs will also fulfil project developers’ obligations to incorporate as much local content as possible within their projects in order to be eligible for and monetise the various Government-led incentives; particularly in the wind farm and marine sectors. The WDVs are expected to be fabricated with local content from a UK supply chain and will be principally utilised for projects in all nations within the United Kingdom,” Infrastrata said. 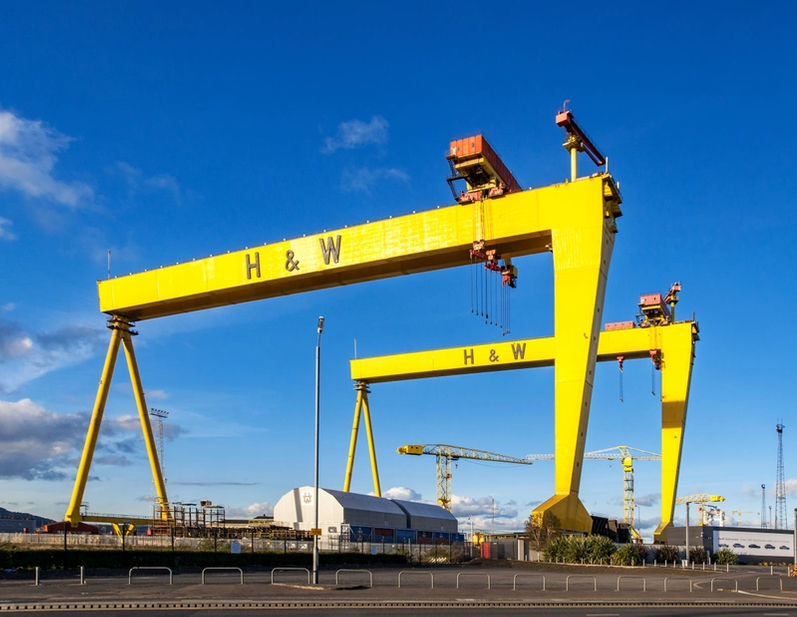 “With the parties having signed this LoI, the next steps towards a binding contract will involve, inter-alia, analysis of the detailed design packages, agreement of timelines and milestones from fabrication to delivery and, finally, placing of the necessary financing structures by Triumph and its partners with Harland & Wolff,” Infrastrata added.

According to Infrastrata, once contracted, each vessel would be expected to generate revenues for Harland & Wolff of between £340 million and £360 million over the 24-30 month period of fabrication, followed by additional revenues if further through-life support contracts are secured.

“Whilst both parties intend on executing a contract to build the vessels by the end of June 2021, it should be noted that this LoI currently does not provide for any binding obligations on either party at this point and should not, therefore, be construed to be a binding fabrication / build contract,” the company said.

John Wood, Chief Executive Officer, commented: “This LoI is one of many potential projects that we are working on and is in line with our strategy to make the Harland & Wolff Group a leading shipbuilder and fabrication company in the UK.

As previously indicated, fabrication will become a huge element of our business moving forward and, by utilising both our Belfast and Appledore capacities symbiotically, we are able to provide an attractive works schedule to our clients.

Should this project proceed to contract, it will provide a sound base for Harland & Wolff to demonstrate its capacity and capability to deliver cutting-edge vessels, whilst retaining sufficient spare capacity for other projects across both yards.

Given the expected quantum of local content that will be required in all UK renewable projects in the future, we have positioned our shipyards to provide pathways to our project development clients, which easily meet their obligations to the Government as they move from the planning to the construction phase of their respective projects.

These vessels would be at the forefront of the latest technological innovations for the marine industry and we are very excited to be a critical part of this hugely important part of the economy that we believe is set to grow exponentially in the months and years to come.”

Worth noting, the news of the letter of intent for wind farm support vessel construction comes just days after Triumph Subsea Services placed a firm order for an offshore construction vessel with Brodosplit in Croatia.