The oceans cover over 70% of the Earth’s surface and play a crucial role in taking up CO2 from the atmosphere.

Estimates suggest that around a quarter of CO2 emissions that human activity generates each year is absorbed by the oceans.

However, in our recent Nature Communications paper, we show that the ocean carbon “sink” could be even larger.

We find that the very surface of the ocean tends to be markedly cooler than the water at a few metres depth, resulting in a substantially larger net uptake than previously thought.

Our findings have implications for our accounting of the CO2 we are emitting – namely, where does the large fraction of CO2 that is taken up each year by “natural” sinks actually go?

Each year, the Earth’s surface takes up billions of tonnes of CO2 from the atmosphere. These natural carbon sinks – oceans, plants and soils – help to buffer the continued emissions from human activity.

The ocean absorbs CO2 from the atmosphere because, as the atmospheric concentration increases, more is dissolved in the surface water. This water may then mix down, or sink as it is cooled, into the deep sea where the absorbed CO2 can stay locked up for hundreds of years as it slowly moves through the deep interior ocean and back to the atmosphere.

But the oceans have not always been a carbon sink.

Before the industrial era, the ocean was actually a net source of CO2. However, the increasing atmospheric CO2 concentrations, driven by human-caused emissions are forcing the ocean to now absorb this gas.

While the ability of the ocean to capture and store carbon has helped to slow the accumulation of atmospheric CO2 – and, hence, the pace of global warming – it has come at a cost. Increasing CO2 in the ocean alters the chemistry of seawater – an effect known as ocean acidification – which has negative impacts on marine life.

Each year, the global carbon budget is assessed to track how well, or not, humanity is achieving any reductions in greenhouse gas emissions.

This assessment involves calculating sources and sinks of CO2 across the world and determining the change in atmospheric CO2 concentrations.

Estimating the ocean sink is clearly needed to complete this assessment, but its importance has a knock-on impact for other parts of the overall budget.

The huge variations in land cover, vegetation, terrain and their year-to-year variations mean that it is currently very difficult to measure the total global land sink accurately. Solving this issue is complex and complicated. However, it can be estimated indirectly.

Scientists can calculate the total human-caused emissions and observe how much of this CO2 stays in the atmosphere. The remainder must have been absorbed by either the land or the ocean. So a good estimate of the ocean sink also enables calculation of how much is being taken up by the vegetation on land. Put simply, the CO2 that goes missing that doesn’t go into the ocean, must go into the land.

Nonetheless, quantifying the carbon absorbed by the vast oceans – whilst they are less variable when compared to the land – is still a complex problem. It requires measurements and observations from a range of sources including ships, buoys and even satellites.

Thankfully, satellite measurements are now becoming much easier to access as European and international agreements have made these widely available to scientists.

Such satellites have many uses, including ocean weather forecasting, so they are well maintained. The situation is a little different for measuring how much CO2 seawater contains, as these measurements are collected by researchers and then voluntarily collated into the Surface Ocean CO2 Atlas (SOCAT).

These – along with the other observations – form a critical part of our ability to determine the oceanic sink. Each year more than a million new measurements are added to SOCAT; a herculean effort involving scientists throughout the world.

Oceanographers and chemists working together

While previous estimates put the ocean sink at around 2bn tonnes of CO2 per year, we find that it could be 0.8-09bn tonnes larger. Over the whole 27-year study period of 1992-2018, this means the global oceans have taken up 67bn tonnes of CO2 rather than 43bn.

This advance in knowledge resulted from us working closely with specialists in sea temperature, physical oceanography and satellites. They explained that satellite sensors measure the temperature at the very surface of the ocean and that vertical changes in temperature occur near the surface.

This means that the temperature at the very surface of the water – its “skin” – is slightly cooler than the water below. This is because the ocean is heated by the sun and must get rid of this heat by evaporation and radiation from its skin. We realised that this meant that the CO2 in the water will also change near the surface, as the solubility of CO2 in the water is highly temperature dependent.

Though the temperature difference is usually quite small, it is systematically in one direction over most of the world’s oceans, resulting in a larger amount of CO2 entering the water.

These temperature characteristics are well studied in oceanography and they teach this theory on undergraduate degree programmes, but no one had clarified its full impact on carbon.

Ironically, this issue had been partly highlighted by marine carbon researchers and published in the journal Nature in 1992, but all of this information had since been ignored.

Our earlier work focused just on 2010 – and now on 1992-2018 – and brings all of this cross-disciplinary knowledge together. Our new study shows that the results are consistent with an independent method for calculating how much carbon has entered the ocean.

A larger ocean sink could imply that CO2 emissions are larger than currently thought or that the land sink is smaller than we currently think.

The sink seems to be increasing with time, especially in the last 20 years, and we believe this is because atmospheric CO2 has continued to rise rapidly, dissolving more every year into the surface waters.

You can see this in the charts below, which show the ocean-atmosphere exchange of CO2 over the study period for the whole world (top) and the northern and southern hemispheres (bottom). The coloured lines show different estimates, while the thick black line shows the average.

Following convention, the uptake of CO2 into the ocean is shown as negative, so descending lines indicate that the ocean is absorbing more CO2. 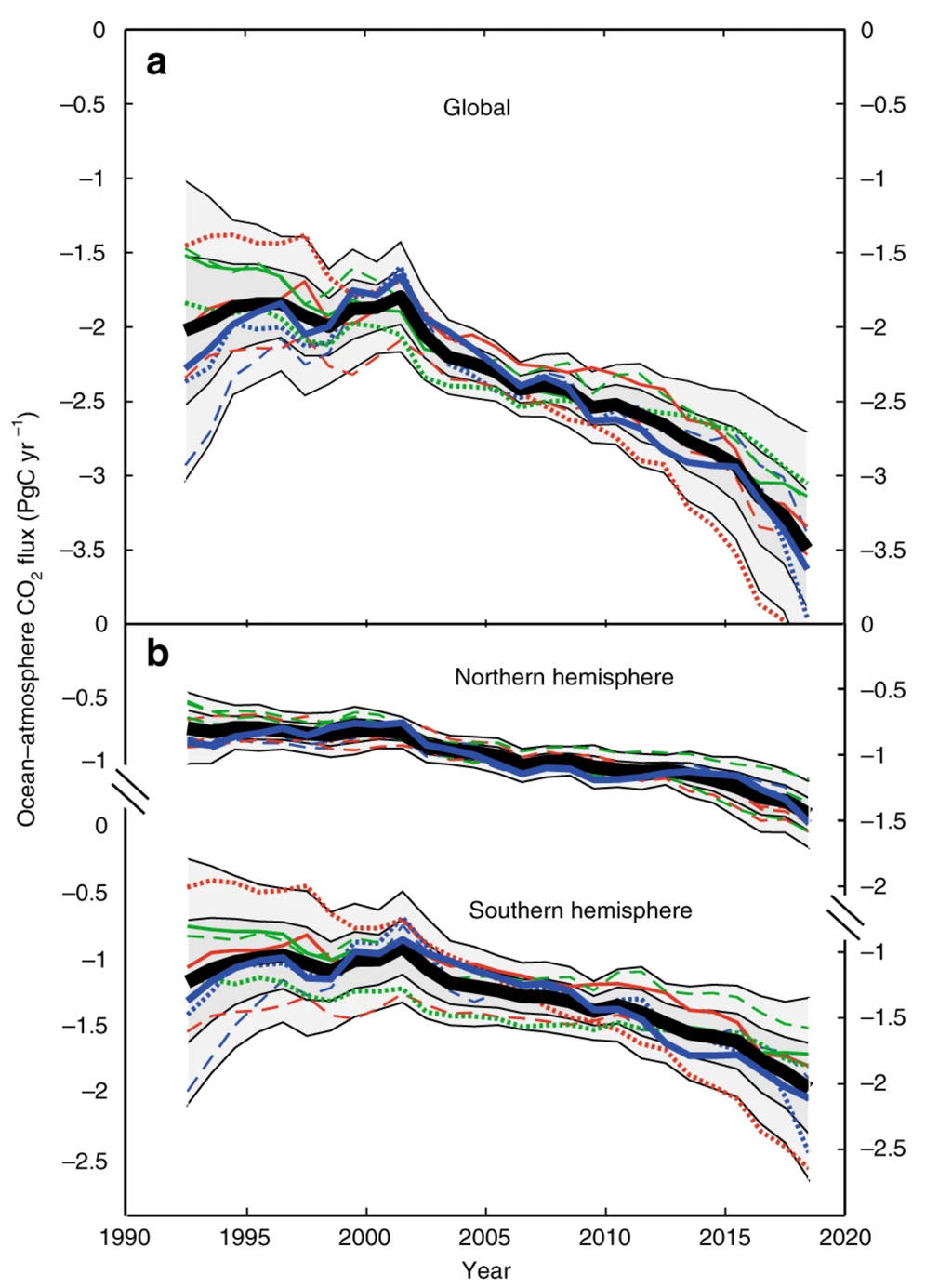 Charts show atmosphere-ocean CO2 exchange for a) the globe, and b) for northern and southern hemispheres for 1992-2018. The coloured lines show nine different interpolation schemes for CO2 exchange, and the shading indicates one- and two-standard deviations of the nine methods around the mean (thick black line). Source: Watson et al. (2020).

Our findings may also mean that the exchanges of carbon between the ocean and land – including those from large rivers like the Amazon, and that we currently consider to be relatively similar from year to year – are in fact more variable.

The answer will be difficult to determine, but is likely to need a cross-disciplinary approach involving modelling, satellite and ship-based scientists. Accounting for these new results will also likely involve some revision to the way in which we quantify global carbon budgets.