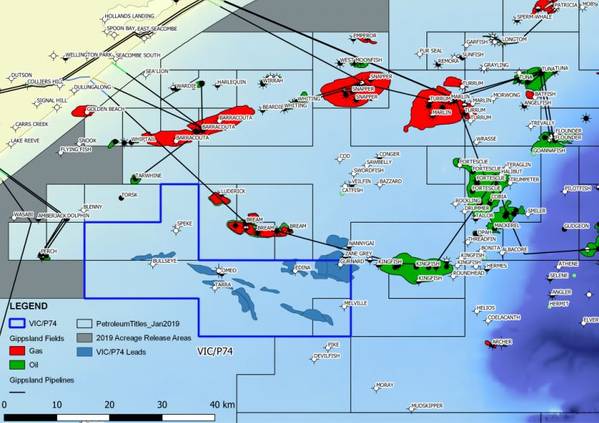 Malaysian oil and gas company has Hibiscus Petroleum has completed the acquisition from 3D Oil of a 50% interest in an oil and gas exploration permit in the prolific Gippsland Basin, off Victoria, Australia

The completion of the acquisition of the stake in the exploration permit VIC/P74 follows the earlier exercise of a farm‐in option by Hibiscus’ subsidiary Carnarvon Hibiscus and the October 8 approval of Hibiscus’ entry into a JV by the National Offshore Petroleum Titles Administrator (NOPTA).

Under the terms of the Assignment Agreement, 3D Oil will remain as the operator of the offshore block with a 50% equity.

“The approval of this dealing officializes the expansion of the Joint Venture’s footprint in the prolific Gippsland Basin,” 3D Oil said.

The 1,006 km2 permit is located on the southern side of the Gippsland Basin. It contains the Omeo gas and condensate discovery and is adjacent to the giant Kingfish oil field.

“The world-class Kingfish Field is the largest oil field ever discovered in Australia and to date has produced over one billion barrels of oil. The primary work program is fully funded and largely consists of purchase and interpretation of reprocessed 3D seismic data,” 3D Oil said.

3D Oil further said that exploration of this region had been previously hampered by seismic imaging problems.

“Recent advances in reprocessing technology has made significant improvements in relation to seismic data quality as evidenced by the Joint Venture’s other Gippsland permit VIC/P57,” 3D Oil said.