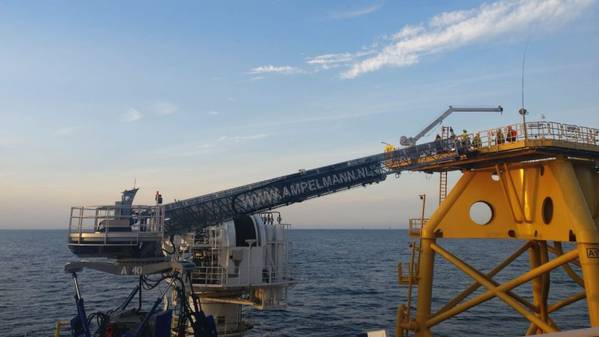 The Dutch company has been awarded a contract by Seaway 7, a Subsea 7 company, for the delivery of one of its A-type gangway systems for an offshore wind project in Taiwan.

“This contract marks the company’s first contract in Taiwan, and it is also the first time an Ampelmann system will be deployed for an offshore wind job in Asia,” Ampelmann said.

The Dutch company will have one of its A-type systems mobilized on the Seaway Strashnov, heavy-lift vessel. According to Ampelmann, this combination has previously been used for a similar scope in the North Sea offshore wind sector.

The campaign, due to start in 2021, will see around two months of offshore operation, in support of the construction phase while installing jackets for the offshore wind farm.

Ramesh Namasivayam, Commercial Manager, Ampelmann for Australia, India, Indonesia & Taiwan: “Ampelmann has a lot of experience in the offshore wind sector in other regions and we are glad to be able to use those experiences to deliver a high-quality service to our clients when they are entering new frontiers.

Ampelmann also said it has noted Taiwan’s ambition to reach the offshore wind capacity goal of  5.5GW by 2025.

“With that in mind, more offshore wind projects are on their way and Ampelmann looks forward to assisting in those as well,” Ampelmann said.